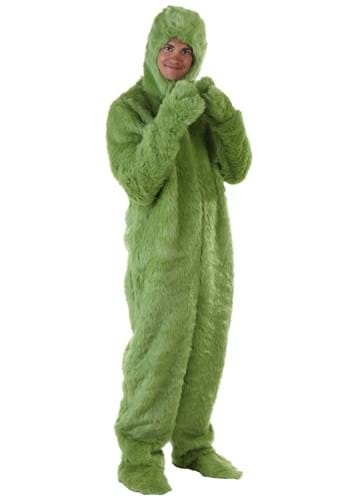 Being a furry monster isn't like it used to be. What was once a deadly feud between man and beast has turned into a pretty peaceful arrangement. Now, with our exclusive Green Furry Jumpsuit, you can let your own inner-monster out to shine!

There are definitely perks that come with being a fierce, green, fur-covered creature, but it used to come at a pretty big price. While you may have been ferocious and surly, it also meant folks from the neighboring village would occasionally come knocking at the door of your hideout, carrying pitchforks and torches, to not-so-politely ask you to stop eating their livestock (and fellow villagers). And even if you were able to fight them all off until they stopped coming, it meant a life of loneliness and mind numbing boredom! But that's not the case anymore, as villagers and monsters have learned to live together in harmony. Whether it's because everyone put aside their differences in the spirit of friendship, or the villagers just decided having a furry green beast on their side might come in handy some day, being a monster is a pretty sweet life these days!

Don't believe us? Try this cozy faux fur jumpsuit on and you can see for yourself. We've attached some matching mitts to the suit's sleeves, and also included a matching hood and pair of shoe covers to give you the full body monster look. And even if you can't find a group of villagers to bond with, you'll at least still have an awesome furry green costume to wear to parties!