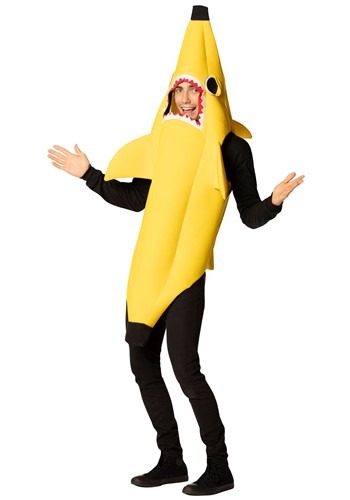 What do bananas and sharks have in common? It's not really a common question that most people ask, but it's the kind of question that we ask! They're both yellow. Wait that's not right. They both have rows of razor-sharp teeth! Hold on a second, that doesn't sound right either. They both grow in bunches and have a tropical flavor. Hmm, what do sharks actually taste like? We're guessing that's not correct either. Ooooh, we got it! They both breathe water through their gills? No, that can't be...

Wow! We're having a really tough time figuring out anything that sharks and bananas have in common. Welp, there's one thing that they both have in common for sure, and it's this Banana Shark Costume.

This wacky costume combines two things that have little in common, the humble banana and the vicious shark! Why are these two things mashed together? Well, why not? It's weird, it's fun, and it's going to be a hit at any costume party. This adult costume comes with a tunic-style top in a mellow yellow color, just like a perfectly ripe banana. The tunic is shaped like the common fruit, but it has some noticeable shark-tastic features. It has fins attached to the front, along with a dorsal fin in back. The hood is also shaped like a shark face and even has pointy teeth around the hood opening in the front. You can wear it over your normal clothes to become the dreaded banana shark!

What do sharks and bananas have in common? Maybe it's only this costume, but if you ask us, not every costume has to make sense. Sometimes you just need to go with your instinct... and ours is telling us that this Banana Shark Costume is the one for you.