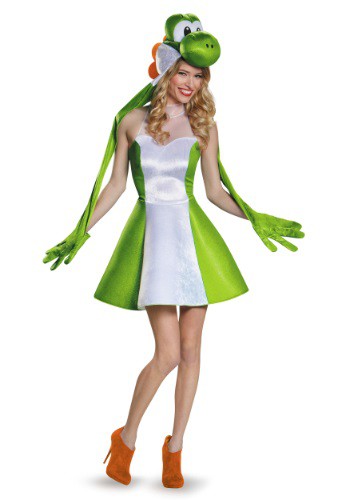 Everyone always tries to pick Mario. There will be four of us playing Mario Kart on the Wii, and three will try to be Mario. Sure, he is the face of the game, and all but other characters are awesome too. Like Luigi, Mario's twin brother. Or Princess Peach of the Mushroom Kingdom.

Or hey, the best character in all the games—Yoshi. But, no, everyone wants to be Mario. (Probably so they can do a bad Italian accent.) Yoshi is a pretty awesome character. In some games his different colored incarnations have special abilities, like spitting fire, flying, and ground pound. And who wouldn't want to be an anthropomorphic dinosaur? We sure as heck do!

And, now you can be the dashing dinosaur in this Women's Yoshi Skirt Costume. The next time you go to play Mario Kart with your friends, slip into this costume, and get ready to leave Mario in your dust. After that everyone will be fighting over Yoshi instead of the Italian plumber. But, they don't get to be him. No, because you already will be him in this dress, and hood. And when guys see you coming in this cute dress, they will be saying, "If I had the choice, I'd spend my 100 coins on you instead of an extra life."