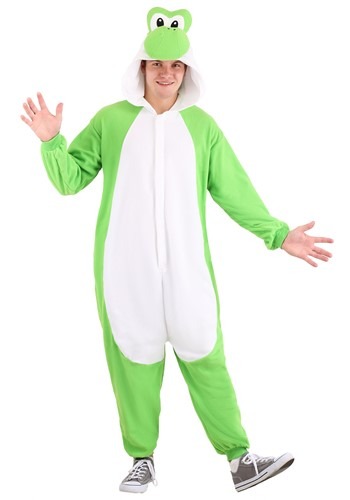 Yoshi used to be just a normal dinosaur. He hung out on his cozy little island, eating everything in sight, chilling with his other dinosaur pals. Then, Bowser showed up and ran amok! The little green dino teamed up with Mario and Luigi to rid the land of Bowser and his dastardly Koopa Kids and became a hero among dino-kind! Perhaps you could transform yourself into a hero, just like a Yoshi! All it takes is an endless appetite for adventure, a desire to do good, and... well, having an Italian plumber for a best bud certainly never hurts!

We have the perfect outfit to help you step into the role of Yoshi as long as you have the appetite for adventure!

This Super Mario Brose Yoshi Kigurumi is an officially licensed Nintendo pajama-style costume. The entire suit is made out of an ultra-soft, green fleece material that's almost too soft to believe! The tummy is a bright white, just like Yoshi's tummy from the video games. It fits with buttons in front, so you can snuggle into this comfy pajama costume with ease. Of course, the best part about this suit is all of the Yoshi details designed right into it, like a red shell and attached tail in back. The hood even has a pair of plush eyes and a squishy nose on top to round out the look. Once you suit up in it, you'll be ready for an adventure in the Mushroom Kingdom, or maybe just a short nap on the couch!

Whether you're a big fan of the Nintendo dino, or you just want a fun new way to take your afternoon nap, this Super Mario Bros Yoshi Costume is a cozy, Japanese-style pajama outfit that's perfect for both!