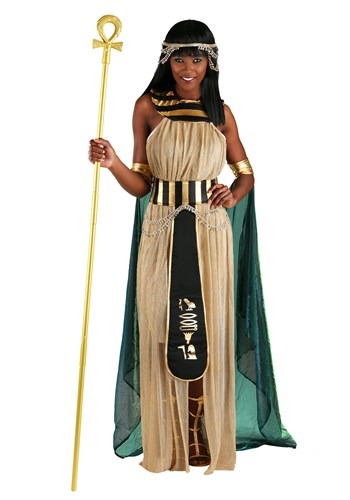 Egypt was home to many great rulers in the ancient world. Snefru built the first pyramid. Senusret I ushered in an era of peace and prosperity and helped irrigate Faiyum to provide more farmable land in his kingdom. Yet, none of those pharaohs seem to have made quite the mark in the history books quite like a certain queen that become Egypt’s most well-known figure, Cleopatra. Why is that?

Well, we happen to think it’s because Cleopatra is a woman of high ambition! Not only did she date the most powerful and most desirable men of her time period, but she also seized control over the Egyptian throne, because her brother mysteriously died when he held power. She also had quite the knack for theatrics. She snuck into Rome by smuggling herself inside of a rug, which was being delivered to Julius Caesar himself. Now that’s a baller move right there! Now, you can easily obtain the look of the renowned leader with this extravagant All Powerful Cleopatra costume.

This exclusive costume comes with many pieces to come together for a regal look, fit for the omnipotent ruler of Egypt. The dress, which is designed by our expert costume designers, is shimmering gold with an overlay, while the belt features gold and black stripes and a drape with hieroglyphics. The costume even comes with a ravishing headpiece. Once you have it all on, you can cruise down the Nile on a barge designed for the ultimate party, or you can wage war on Ptolemy! It’s totally up to you.