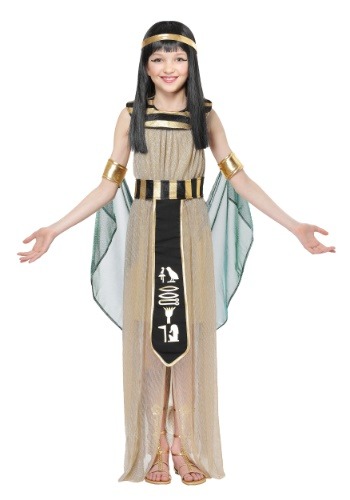 Is your daughter a strong leader? When it comes to recess is she the one who organizes the races or decides what that group is going to pretend that day? Maybe she's always volunteering to read in class or bringing that science project to the next level. However she uses her leadership skills, you know that she could do anything, even lead a nation.

When she was eighteen years old Cleopatra was put on the throne alongside her ten-year-old brother. She enjoyed a couple of years of power but when she got older her brother banished her. After that she probably let things go, right? Ha! Nope. She had some servants roll her up in a carpet and sneak her back into the palace when her brother was having a visitor, Caesar, you know, the super famous leader? Yep, so she meets up in secret with this guy who had a much larger army than her brother and convinces the guy that she should be the one on the throne. How's that for leadership? She might have been wearing a costume very similar to this when she enrolled herself from the tapestry. She would probably have been wearing a golden light weight dress and the traditional Egyptian golden collar and belt. With the undeniable stance of a Queen and her legendary diplomatic skills, it's no wonder that Caesar sided with the celebrated Cleopatra.

When your little girl dresses up as this mighty queen she's sure to feel as powerful as that immortal heroine that ruled in 51BC. Maybe she's dressing up for a school project or maybe she wants an imperial Halloween costume this year, either way, this Cleopatra Halloween costume is sure to support her leadership aspirations. She knows better than anyone, that a queen doesn't follow the crowd, the crowd follows you.