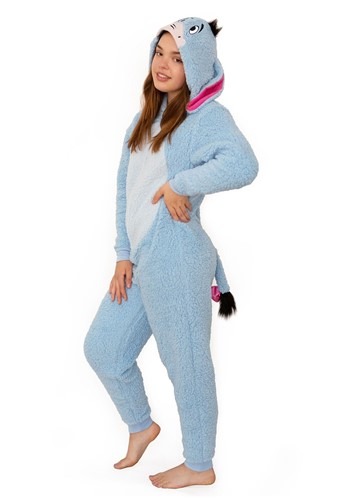 Remember when everyone from the 100 Acre Wood dressed up like Tigger to make him think his family had come to visit? Well, that didn’t go the best, but at least it helped Tigger and the gang understand that they are each other’s family. What’s surprising about the whole thing is how Eeyore has been feeling since the Tigger party. Eeyore doesn’t look different or seem to be acting differently, and yet, his lean-to has looked livelier, somehow. In fact, Piglet was just telling Pooh that he has been noticin’ some soft music whenever he takes a stroll past Eeyore’s place. Pooh, being a thoughtful ol’ bear, has decided that maybe Eeyore could use a little dress-up party of his own. Instead of inviting just the 100 Acre Woods though, he’s extending the invite to anyone that cares about the old grey donkey. All you’ll need is a good Eeyore disguise and a tail that won’t go missing.

This Eeyore Union Suit should do the trick! The super-soft jumpsuit is designed to look just like Eeyore but will fit a full-grown adult. Long, droopy ears are attached to the hood with all of Eeyore’s familiar facial features. On the back of your suit, you’ll even find the perfect Eeyore tail—tack and all. We do suggest reminding your friends that it is a tail and not pull-string, to make sure it stays where it belongs. You’ll be ready to party the night away with Eeyore and all his look-alikes in this cozy blue disguise.