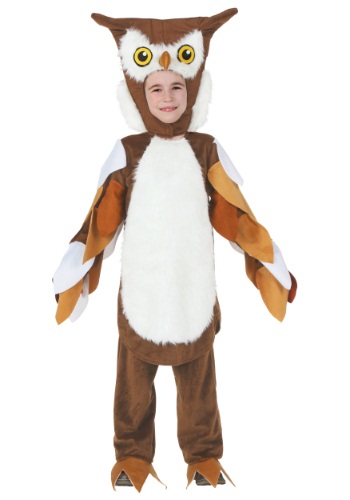 Encourage the little one in your life who loves climbing trees, perching atop branches, and wishing he had the required appendages to glide to the forest floor. Okay, maybe don't encourage such risky behavior, but also don't stifle imagination at such a tender young age! If he wants to be a slimy green caterpillar, a tall Oak tree, or the wisest of the animal kingdom's birds, definitely encourage that! You know as well as well do that when you're sixteen and up, you are never again as keen on the idea of dressing up as something as simple as an owl.

Unless, of course, you have vivid and wonderful memories of such an experience in childhood. Help your little one have just that in our Child Owl Costume, and exclusive of ours that will have him or her the sole source of all the hooting and hollering at any costume party. We have the same style of costume in toddler and adult sizes, too, so consider rolling around the neighborhood in a flock this Halloween. Hop into this long-sleeved velour shirt, zip the zipper in back, and realize this: that imagination, like anyone who wears this, cannot be caged! As a rule of thumb: branches generally hold less weight than it seems like they are capable of holding. Pass that along, yeah?