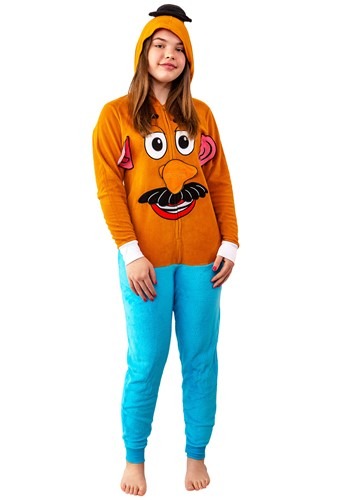 You know who our favorite Toy Story character is? Mr. Potato Head. Sure, he might not be a rootin' tootin' cowboy, like Woody. He might not be a brave Space Ranger, like Buzz. He's not a free-spirited adventurer, like Bo Peep. He's not even cool dinosaur, like Rex. In fact, Mr. Potato Head is kind of a grump and he's a little bit lazy! So, why is he our favorite character? Well, because we can relate to him! He'd probably rather hunker down on the couch for a night of movies with Mrs. Potato Head, instead of heading on a dangerous adventure with Woody and Buzz. If we're being honest... we're just the same!

That's also why we love this Toy Story Mr. Potato Head Union Suit for women! It's a cozy costume that turns you into Mr. Potato Head and gets you ready for a nice, relaxing night on the couch!

Inspired by the iconic Toy Story character, this women's Mr. Potato Head Union Suit Costume is a pajama-style jumpsuit that's made out of a cozy fleece material. It fits with a zipper down the front of the suit and it even has rib-knit cuffs at the wrists and ankles to help give a "tucked-in" sort of feeling! It has Mr. Potato Head's embroidered features on the front, so when you snuggle into this outfit, you can cosplay as your favorite Toy Story character! Finally, the hood has a tiny derby hat attached to the top to round out the whole look!

If you're looking for an outfit that you can cosplay in, while still being comfy enough to take a nap, then this officially licensed Toy Story pajama-style jumpsuit. With a fleece construction, it almost feels like wearing a blanket!