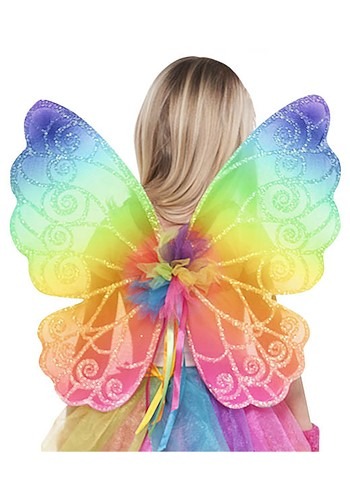 Lights in the Sky

For many years, people have been reporting strange sightings in the atmosphere. The reports indicate a curved line of prismatic color sometimes stretching entirely from one point of the horizon to the other. People have claimed to see nearly every color they can imagine from red, orange, yellow, green, various shades of blue, and even purple to be present.

The leading theory of the origin of these "rainbows" is that they are evidence of magical fairies traveling quickly from one place to another. These claims are generally accepted as truth since, as everyone knows, fairies are quick and difficult to catch or see.

Help to attract the presence of your local fairies with this lovely pair of Rainbow Fairy Wings. These wings have sheer fabric with a rainbow ombre color stretched over wire to maintain their shape. They fit comfortably with shoulder straps over most clothing and costumes and feature dangling ribbons and mesh fabric to complete the look.

Scientists claim they have printed numerous theories and even proven facts describing this "rainbow" as an effect of light being broken up due to moisture in the air, however critics to these claims argue that they have witnessed the same "rainbow" effect during summer on the ground while playing with their sprinklers in the lawn. To help solve this mystery, try out these Rainbow Fairy Wings and see if folks start seeing the magic for real!