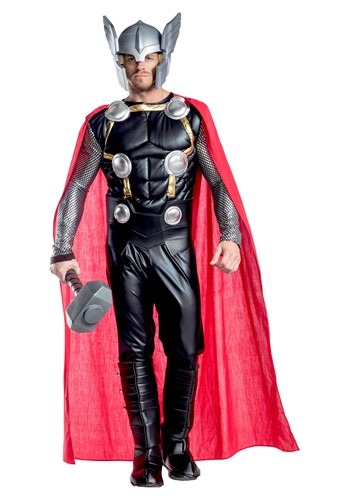 Anyone that's ever heard of Norse Mythology has heard of Thor. They would know that he's the god of thunder, a genuine deity that commands the storm and hunts down the enemies of Odin, the Allfather! They also have a pretty clear image of how he might look... shirtless, tremendous beard, and a flowing red cape! Well, when Thor appeared in classic comics, he looked just a little bit different. But, there's nothing quite like a comic book costume!

His helmet has gone from a bright steel blue and his original armor was a bit more like another flying super man was involved in its design. (What exactly were those weird blue circles on the front of his armor, after all!?) Fortunately, for his first visit to Earth in the Marvel Cinematic Universe, Thor must have had some of Heimdall's advice on fashion. The shiny black armor was far more fitting. (Of course, we're still pretty glad that the epic cape stuck around!)

It's time to claim the power of Thor with this officially licensed, Marvel Premium Thor costume. This ensemble includes a shiny black jumpsuit that will have you looking like you flew out of the silver screen. Careful stitching gives an authentic flair to the jumpsuit and the top portion features padding for a muscular look as well as detailing that replicates the Asgardian technology of Thor's chest armor. Claim the might of flight with the winged helmet and flourish your red cape as though you're ready to unleash a bolt of lightning. Don't forget Mjolnir to secure your victory against the forces of evil... plus, you never know when Loki is nearby!

You might not be a movie star. It's possible that you also aren't an ancient deity of the storm and skies. But, when you gear up in this Premium Thor costume from the MCU, you'll feel quite a bit closer. Plus, everyone knows that it is the worthy who gains the power of Thor, so looking the part has to get you a ways closer to the power of thunder!