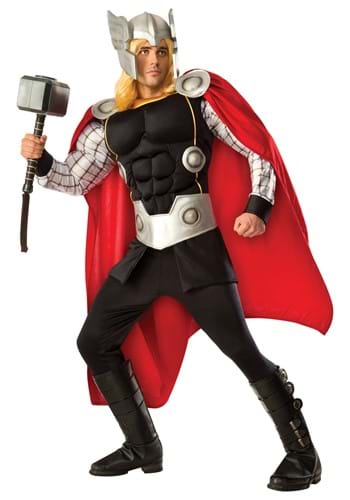 It is easy to assume that once you're a god that you don't have anything else to learn. Well, try telling that to the golden boy and god of thunder, Thor. A hint of arrogance led this light-hearted lightning-chucker down a road of self-realization that just wouldn't stop! Could he handle just living the life of a super studly mortal man? Well, maybe he could have made it. Too bad the world's fate wasn't about to let him sit around!

From Loki running amok to aliens bent on taking over the whole galaxy (or at least dusting half of it), the guy hasn't had much time to relax. Of course, all that running around chasing after his hammer and discovering that the lightning was within him all along reminded him that the true god of lightning was the friends he made along the way. (Or something like that.) But here's the real secret. You were along for all those lessons. That means one thing.

It's time to claim your power and save the world by gearing up in this officially licensed Grand Heritage Thor costume! This luxury Marvel costume is the whole ensemble—everything you'll need to feel like the god of thunder, himself. The comfy shirt has a lattice look and the tunic has padding to bulk up your godly muscles and vinyl medallions to accent everything else. Elastic waistband pants feature straps under the soles for a secure fit and boot tops let you wear your own shoes while still pulling off the Asgardian look. The cape is bright red with shoulder guards and vinyl medallions, and the molded plastic helmet features perfect comic-style wings on the side. Fit the synthetic wig on for your golden locks and, finally, brandish the Mjolnir hammer to the sky to call out your name: Thor!

Clearly, being Thor is more than just having your mighty hammer at your side. But, still, being the Master of Mjolnir is pretty awesome! Show the world that you're both when you go soaring to superherodom with this Grand Heritage Thor costume.