King of Hearts Costume for Kids 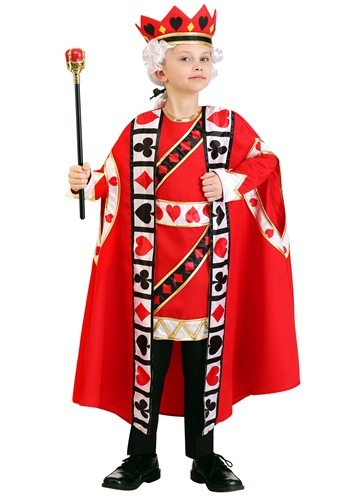 Heavy is the Head

The King of Hearts has a ton of responsibilities. He rules over all the playing card people of Wonderland. He's in charge of pardoning people that the Queen of Hearts has unjustly convicted. He's also in charge of keeping those wily characters like the Mad Hatter and the March Hare under control! We also hear he plays a pretty mean game of croquet, using a flamingo as a mallet (Wonderland traditions are weird). It's definitely a tough job and requires someone who has a head that's strong enough to wear that crown!

Crafted by our costume designers, this exclusive King of Hearts Costume is a kid-sized outfit that packs plenty of regal details. The robe is bright red with a card suit inspired pattern in front that features hearts an diamonds, and spades. The tunic has heart and diamond patterns on the front, along with gold piping along the hemline. The crown really makes your child look like a regent! The bright red color matches the robe and it has black hearts and gold diamonds printed around its circumference. It's a look that will make all of the card soldiers stand in line, waiting for their orders!

If your child is ready to wield the authority of a king, then he will feel right at home wearing this King of Hearts Costume for kids. Just remember that his authority only extends to the realm of Wonderland, so you can still be boss in your home when your child walks around claiming to be king!