Plus Size King of Hearts Costume 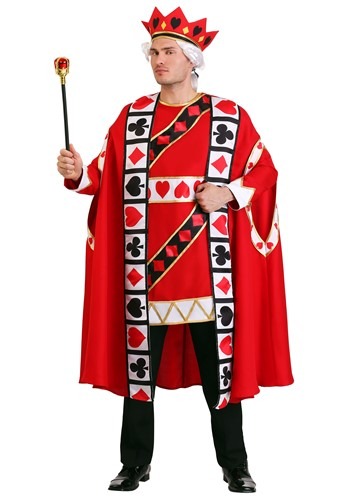 Do you know anything about the cards that we've been playing with our whole lives? Who are those mass-printed people that we've all argued, cheered, and competed for? We've played Go-fish with these cards since we were kids. These faces have been changing fortunes for centuries now. They are some of the most printed portraits out there. And here's the thing, most of us don't even know their first names.

We're going to let you into the inner card circle. Hope you're ready. The King of Hearts is King Charles, ruler of England from the house of Stuart. The King of Diamonds is King Caesar, a legendary Roman ruler, and lover of salad. The Spades claim King David, a biblical leader who ruled over Israel and Judah. And the King of Clubs is Alexander the Great, whose legendary reign stems from the Greek isles. Now that you know more about these kingly cards, perhaps you're ready to take your place in the game with this Kingly card costume!

This is a uniquely regal look that's sure to stand out from the pack. You'll have a winner when you pick this Made by Us King of Hearts costume as the high quality allows you to play this costume again and again. It features a tunic with long sleeves that has card symbols that are trimmed in gold. The tunic is layered under a long coat with heart-trimmed slits on the sides and bordered card symbols to drive your lucky look home. The ensemble is topped with a regal heart crown that'll let people know you're holding a winning hand.

There's something amazing about feeling like a classic winner. Want a part of the action? Ante up when you rock this high-quality costume. Want to head out with the pack? Pair this costume with the rest of our playing card costumes for a sure bet on Halloween night!