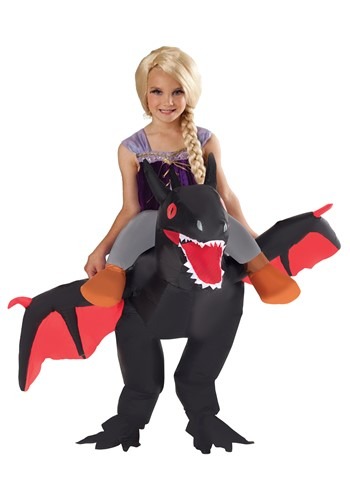 How to Ride a Dragon

Dragons seem like a cool pet, so we can't blame anyone for having read all the how-to books and studied all the past riders’ journals. You’ve caught your child pouring over diagrams that detail every aspect of dragon-riding, but they haven’t been able to master the skill. It seems that dragon-riding will not something they can learn from books alone. It could have something to do with the tiny matter of dragons not being seen for thousands of years—some have suggested that dragons have never existed.

Being firm believers in the existence of dragons, and well versed in their magics, we highly doubt that dragons simply stopped being. As such, we support your child’s ambition to become a top-notch rider. While they’re waiting to find a living, breathing dragon, however, we suggest finding some alternatives to practice what they’ve learned so far. A trip to the grocery store to ride a coin-operated pony is always great. If you have a horse available, that would give some more insight on staying seated while mounted on a wild dragon. Or, for a more convincing practice session, this Inflatable Black Ride-On Dragon Costume will let them really prepare!

While we’re out looking for real dragons, get your child outfitted in this Black Ride-on Dragon suit. In the pull-on look, they will have everything they need to convince their friend they’ve mastered this legendary skill. Mounted on the black of this fierce dragon, they’ll feel ready to take flight when they venture out the front door. In full control of their inflatable dragon, they’ll be able to journey to the farthest reaches (that they’re allowed to visit) without the dragon flying them off course.

Once your kiddo has mastered dragon-riding, they’re not going to want their dragon to need a nap mid-flight. Keep their mythical friend standing strong and ready for a ride with AA batteries. It may not be a magical way to keep a dragon upright, but it’s better than cleaning up grilled sheep (their favorite energy source) from the neighbor’s yard.