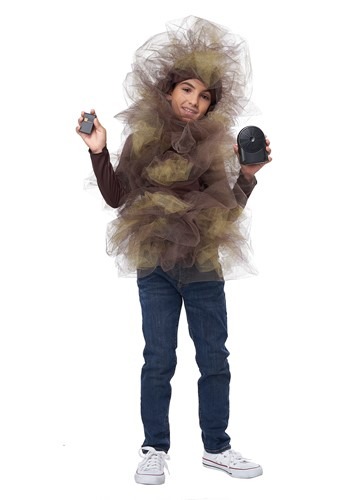 Farts are funny. We know, we know. As an adult, you're supposed to be above fart comedy... but there's just something about farts that are universally funny. Just think about it for a second. Farts make that muffled noise that sounds kind of like a really bad trumpet player. They come out of your bottom, which is probably the funniest place it could possibly come from. Finally, they smell funny. Now, can you honestly tell yourself that a fart isn't funny?

That's what's great about kids. Kids don't have any pressure on them to be mature, so they can laugh at a fart for what it is! It's also why this Fart Cloud Costume for kids is pure, comedic gold. When your child wears it to the next costume party, they'll be getting ALL of the laughs!

It might be simple, but this Fart Cloud Costume is highly effective! The costume comes with a top that's made out of various tulle fabric. Shades of brown and green give the top a look that's reminiscent of cartoon depictions of farts. Your child can slip this on over their normal clothes, making it an easy outfit for your child to change into. Of course, one of the funniest parts about a fart is the sound... and this costume delivers that as well! This costume comes with a small speaker that makes fart noises with the press of a button. The speaker has a small battery pack attached to it (batteries sold separately).

It's okay. You can admit that this Fart Costume for kids is hilarious. It might be sort of childish, but then again, kids have the purest sense when it comes to comedy and we think it's about time that all of us adults started embracing a little bit of childish humor!