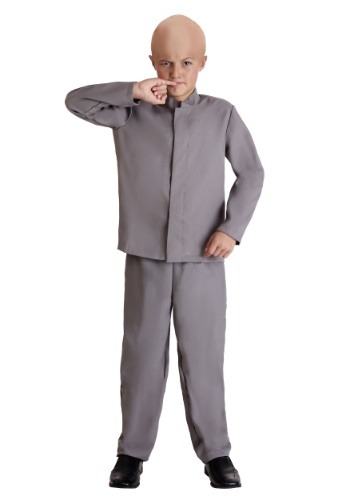 Once you’ve raised a toddler you know: being e-vil can start at a very young age. One minute he's in diapers and the next he's trying to hold the world ransom with one of his doomsday devices. You can’t hold it against him, can you? Look at that face and the way he holds his pinky so delicately to his lip.

Let’s not forget that it is your job to foster his dreams, even if they are more than a bit evil. Talk to him about the benefits and pitfalls involved with a life of masterminding. Once he’s made his choice, though, you just have to make sure that he's prepared for world domination, since no one takes a super evil genius seriously unless he's wearing a devious grey suit. Luckily for you, not only does this Kid’s Mini Grey Suit Costume make him look dashingly handsome, but it also gives him an aura of importance that makes henchmen obey orders immediately.

He’s still a kid, after all, so it’s nice that the pants of this costume mean your evil little can stretch and move freely, in case he wants to break up taking over the world with a trip to the playground. The oversized grey jacket boasts a stiff mock collar, making him a memorable member of the trick-or-treating crew. Something tells us he may drop the whole doomsday deal when he sees how much candy he’s raked in. But you must admit, it was pretty cute while it lasted. (Hairless cat NOT included.)