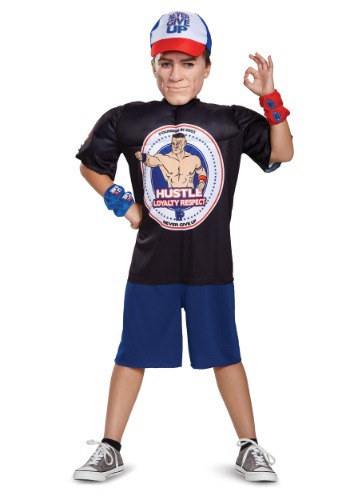 What's better than walking underneath the WWE Jumbotron and sliding into the wrestling ring to the tune of "The Time is Now?" Is there anything better than showing off your swag and letting folks now you're all about Hustle, Loyalty, and Respect?

No, of course, there isn't! Not a darn thing! Which is why your little guy would probably love to be just like John Cena. He's probably already all "Never give up" all the time, so why not get him the look to match his ethos by getting him this kid's WWE John Cena costume!

He's sure to love becoming a WWE superstar, even if it's just a little costume fun. After all, he's too young to have mastered moves like the Attitude Adjustment, and he might not even be ready to tell his friends "You can't see me!" but he's sure to be all about doing his best to imitate superstar Cena!

This classic muscle costume comes complete with everything he needs to be a miniature John Cena, and with the muscle effect printed top, mask, and hat, he'll have the ring style to let him become his idol. Take him out trick-or-treating with this WWE costume style, and he's sure to be one of the coolest kids in the hood!