Inside Out Anger Classic Boys Costume 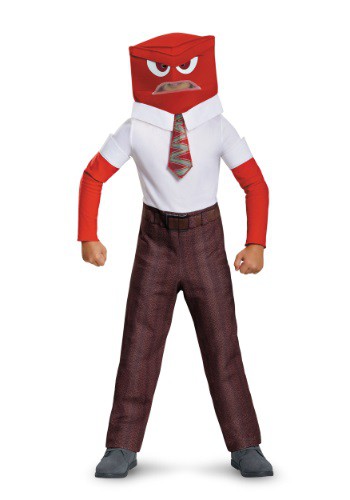 Whooo boy! Anger sure is a handful, huh? Talk about having a short fuse. Sometimes it seems like anything with set this guy off. But, we suppose that's just how it does when anger is your only emotion. Anger is so angry you'd think maybe he should visit a therapist, try talking about his feelings. Unfortunately, his only feeling is anger, all the time. Kinda stuck between a rock and a hard place, huh? But don't tell him that. He gets angry. Well, he doesn't get angry, he already is angry, but you get the point. And anger sure can be scary. Sometimes anger gets out of control and freaks out even when he doesn't need to. Emotions are hard, man.

Especially when it comes to becoming a teenager. Riley sure was going through a lot of stuff, making her emotions go a little off kilter, and anger was right there for all of it, blowing his top at the slightest provocation. It goes with the territory of becoming a teenager, but that certainly doesn't make it any easier to handle. Maybe this anger costume would make a great way for your kid to express their anger positively! We've always practiced yelling into pillows, but if you can just become the character of anger, then it might be a bit easier to actually handle all that anger, and learn from it, and realize you don't need to be angry so much. It's just an idea. If we had a choice we'd love to be Joy all the time, but anger is a part of us, so might as well make him a part we can work with.

Product Reviews       Write A Review1 Review
M.N.S
By Current Customer / September 20, 2016
Exactly like the picture
Was this review helpful to you?YesNo
Get 20% Off