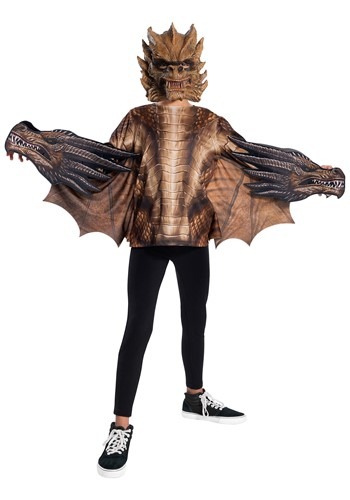 Which Wears the Crown?

Of all the great monsters that dwell in the skies and seas, none can really challenge the supposed King of Monsters like the true king: Ghidorah. The stories vary. Alien dragon from beyond the stars? A mechanical marvel designed to confront other kaiju beyond control? Maybe what was left of the mythological hydra that nearly took down the gods!? Three heads, two tails, and a mighty powerful body, this creature is always testing Godzilla's strength.

But, the real question that constantly stands out is this: which head wears the crown? Even if we rationally assume that Ghidorah would take the title of King of the Monsters, he's got three heads. Do they fight over which one gets the crown? Does he run to the local smith and have a couple more made? These are the tough questions that we need answers to! Unfortunately, Ghidorah isn't much for words usually. Fortunately, we've got a way to finally get the answer!

We will require the help of your ingenious tyke to finally know the truth. Start by giving them this officially licensed King Ghidorah costume from Godzilla: King of Monsters. This is a custom printed shirt with flared sleeves that look like giant bat wings. Twin dragon heads serve as gloves for your tyke. Combined with the dragon headpiece, your tyke will be able to craft the whole image of Ghidorah! All they'll need now is to prove they've got the stuff to take down Godzilla and the rest of the ancient kaiju and we'll know where that crown is meant to rest.

Who's the Real King?

We always love watching the powerful creatures of the giant monster mythology fighting against each other. Of course, if they ever managed to settle their differences and crown a king that they wanted to serve, we'd all be in trouble. Make sure you're ahead of the game by getting Ghidorah on your side with this kid's costume.