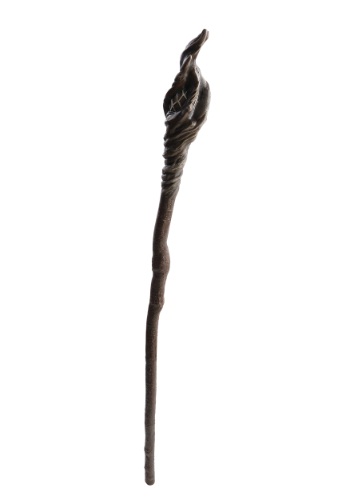 What makes a wizard a wizard? Well, that’s a tough question to answer as it often depends on which sort of wizard we’re talking. Certain profound and vaguely British schools insist that you have to have the inborn talent and, then, a wand. Plus, of course, several years of education… if you survive your classes, that is. Others are looking for lofty tomes, filled with dust and ancient secrets. But, the most powerful wizards of all are known by their powerful staves. How they acquire them in the first place is as much as mystery as the upper limits of their might. Why, Middle Earth wizards are practically gods.

So, we are quick to jump at any opportunity to collect any of the wizard castaway gear. And, one of our favorites, Gandalf, just received one heck of a promotion! After a bit of a tumble with a Balrog—an activity we do not recommend for anyone—Gandalf got himself a brand new ivory staff. So, he sent over his hand-me-down and you’re the lucky recipient of the one and only Gandalf Staff. Made of two pieces of enchanted (or is that molded) plastic, the staff measures 54” when readied and shows all the grand texture and carefully painted details of the Gray Wizard’s cinematic prop. Whether you seek to call yourself Gandalf or follow in his mighty footsteps, this staff will surely be an integral part of your future sorceries.