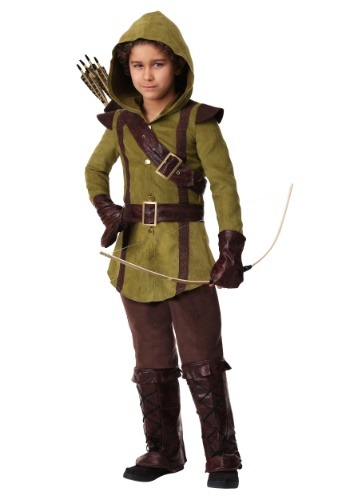 Society shuns rule-breakers. They lock them up or run them out of town. Sometimes though, that's exactly what the world needs. A little bit of rule breaking. Just take a look at the tale of Robin Hood.

The law labeled him an outlaw. The Sheriff of Nottingham wanted nothing more than to lock up poor Robin Hood and throw away the key. And if it were up to Prince John, Robin and his whole lot of Merry Men would be banished from the kingdom forever. The ordinary citizens of the kingdom saw it a little different though. They saw him as a hero! Robin saw the laws that hurting his friends and family, so he decided to valiantly rebel against the kingdom! He took his bow in hand and began doing a little bit of "wealth redistribution" in his land. That's one case where being a rule breaker was a good thing. If your child has a penchant for breaking the rules, then maybe it's time to focus that trait into something heroic!

You can transform your child into the legendary bandit from the tales when you get this Robin Hood costume for kids! This exclusive outfit is inspired by Renaissance clothing and comes with a light green tunic, perfect for blending in while traversing Sherwood Forest. The hood even helps hide his identity from the evil Sheriff of Nottingham! The costume also comes with a pouch for carrying gold, and a quiver that's perfect for storing extra arrows. Finally, the fingerless gloves and boot covers pull the whole look together!

Robin and his Merry Men