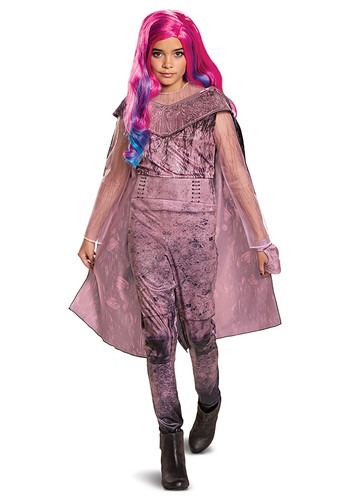 Who knew happily ever afters could be so treacherous? Well, what can we expect? High school is always ripe with drama and if you stir a little fairy tale magic in there, it only would get worst. After all, if you thought the silent treatment from your best friend was bad in the ninth grade, just imagine what it would be like if she had the option to cast a spell or create a potion. That would be a mess. Poor Audrey can't change her friend's hair color with a switch of her wand or make someone fall in love with brownies that have been dosed with a literal love draft. She simply has to rely on her royal decorum to make friends and influence people. We have to say, though we don't love every move that Audrey, daughter of Aurora, has made, we understand where she's coming from!

This Audrey costume from Descendants 3 is sure to cause some serious excitement for Halloween this year! This costume is inspired by Audrey's solo scene. This pink jumpsuit is printed with a corset to create this character's look while keeping it comfortable. The pink cape attaches to the jumpsuit's shoulders with hook and loop fastener strips. With mesh sleeves and one mesh glove, this costume embraces Audrey's transition from princess to temporary villain!

Influenced by the Isle

Looking to recreate Audrey's look down to every detail? You can top this costume off with a crown and Maleficent's staff to make your princess look like she's just made her "big break" and stolen the queen's crown as well as the magical staff. While your kiddo might be excited about trick-or-treating and Halloween festivities, we're sure this costume might cause some outbreaks of Audrey's song as well. Get ready for a Descendants style performance, this costume is a real show-stopper!