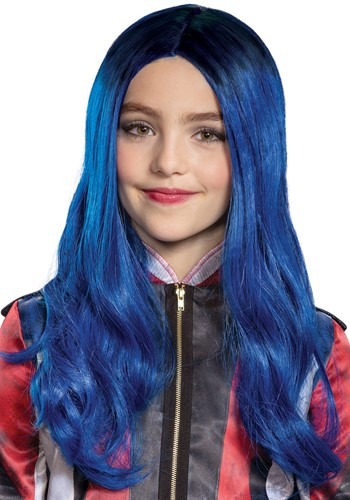 A Look to Last All Time

The story of how Evie gained her look is practically a legend. While the Evil Queen obviously was pretty rotten, she had a strong want to give her kiddo a pretty stellar hairdo. (Admittedly, she could have focused on teaching her more about the magic that she was supposed to inherit, but... priorities, right?)

She began by asking her mighty ally: Magical Mirror in my hand, who's got the best hair in the land? The image swirled and revealed an astonishing unicorn with a mane of vivid blue and black. The Queen immediately sent her huntsman off to slay the divine beast and steal away its hair. (Always with the killing, Queenie! What's your deal!?) But, when the unicorn was brought before the royal family, it found Evie's smile so precious that it offered her its mane as a gift!

If you're looking to replicate Evie's signature look, though, you won't have to go to such lengths. You can just get this Evie wig from Descendants. The synthetic hair has a blue and black ombre effect just like from the films!

Epic Hair in a Snap

Help your tyke transform into Evie's hairstyle as quick as magic with this blue and black Descendants wig.