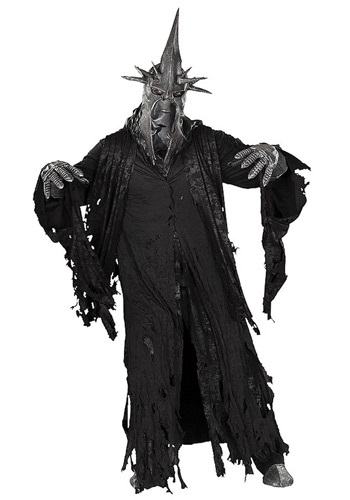 Plenty of people want to dress up like royalty at Halloween. Who doesn't want all the fun of looking like a king or queen, prince or princess, without any of the burdens of governance? But this Deluxe Witch King Costume is even more appealing than most regal outfits, because becoming the Witch King takes way more time and effort than stepping into the shoes of any run-of-the-mill monarch. You can't even spell Lord of the Nazgûl without tracking down that pesky diacritic!

Plus, if you weren't a Númenórean ruler already, you kind of missed the boat. If there were a recipe for Angmar, the first ingredient would be King of men, ancient and withered. And since the preparation instructions would call for it to simmer for at least a millenium, we think you'll agree that it's way better to go store-bought on this one. But because this outfit really nails that feeling of dread you're supposed to get in the presence of a genuine Ringwraith, we don't think you'll be disappointed.

With a dark, festering shroud that cloaks the undead body in shadow and realistic details on the latex armor, this utterly terrifying ensemble is going to give people the heeby-jeebies. Just be cautious: your spectral visage alone might scare any nearby halflings half to death! But if you know any other mortals willing to serve Sauron for a few centuries (or brave enough to stand up to him), the possibilities for group costumes are unlimited!