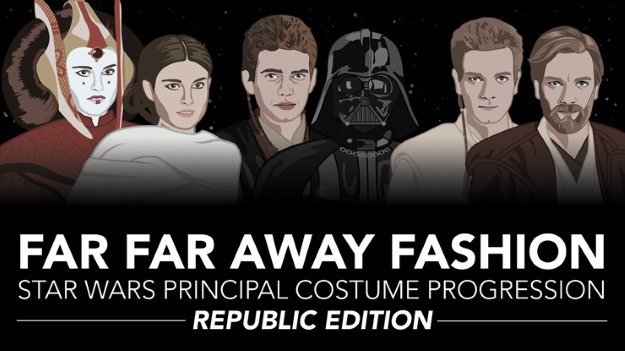 Since our first edition of Far Far Away Fashion was so well received, the wait for a follow up might have been less than enjoyable (but still better than waiting for The Force Awakens to come out). Well, the wait is over (one of the waits, anyway...) and we're happy to present to you this Republic Edition costume guide! Straight from George Lucas's Star Wars prequels, we have broken down some of your favorite characters' main costumes.

There was a serious debate over which of Padme's 12 gazillion costume changes to include, but we tried to pick out the most memorable fashion moments. With Anakin and Obi-Wan included for good measure, we have the looks of your three favorite heroes of the Republic. Well...heroes per se. That whole Darth Vader thing with Anakin is still a bit hard to swallow.  (How did the little Ani who won our hearts with his Podracing exploits turn out to be the worst villain of all time??) You can use this infographic to check out his transformation, and it's a great way to study up on the rest of your favorite prequel looks, too!

When George Lucas set out to create the prequel of his famed original Star Wars series, he knew that he was going to have to take a different approach to the costume choices of the new films. Where he has previously shown war-torn worlds under the tyranny of the Empire, the new movies focused on the Galactic Republic at its height. New and intricate designs would be much more elaborate and ornate while still tying into the original aesthetic of the first series. Our new principal characters represented both sides of the spectrum, from royal opulence to the humble style of slaves and Jedi. Employing the talents of costume designer Trisha Biggar, they set out to establish a new take on Star Wars for a new generation.

Anakin's journey through the prequel trilogy took him from humble slave beginnings to becoming the most feared villain in the Galaxy. Starting out on Tatooine, his slave costume was constructed from a natural colored coarsely woven silk-linen-hemp mix fabric. Ragged leg wraps, faux suede boots, and a leather utility belt rounded out his look. He added a helmet with attached goggles and a neck protector when he piloted her Podracer. By the time of Attack of the Clones he had become a Jedi Padawan and wore a costume similar in style to the other Jedi, but of different construction. A leather tabard covered a darker-hued tunic and pants. His belt and boots were similar to that of Obi-Wan's. Only very slight color changes were implemented for Revenge of the Sith, but he was outfitted with the typical Jedi cloak. After turning to the dark side he nearly met his fiery demise as Darth Vader but managed to survive long enough to be rescued and repaired by Palpatine. Using both cybernetic technology and the powers of the dark side, Palpatine outfitted him with the infamous Darth Vader suit. It was only slightly altered from the original Star Wars design, with a polished effect to give it a brand new appearance.

Starting with The Phantom Menace, Obi-Wan's costume was constructed to be similar to the one worn by the character in the original Star Wars. We found Ewan Mcgregor sporting a tunic and tabard over plain shirts and pants. The tunic and tabard combo was constructed with a light woven fabric known as Indian homespun. Vintage brown wool was sourced as a match to Sir Alec Guinness's original cloak to create the Jedi garb for the new prequel films. A leather belt and riding boots finished his look, and his only change in wardrobe was an alteration of pant and undershirt color in Revenge of the Sith.

So what do you think? Love the style of the prequel series? Not so much? Whether you have fond memories or are still confused as to why Gungans live in bubble domes, we want to know! Leave us a comment below, hit us up on Facebook, tweet us, or climb up on top of your replica Jedi Temple and send us smoke signals from afar! We're going to climb back into our meditation chambers and just slowly, slowly wait for the J.J. Abram's iteration of Star Wars to hit the theaters. (Well, except for that whole Halloween thing. Our bosses might want us to show up to work for that.) And, of course, we have a robust selection of Padme, Anakin, Obi-Wan, and Star Wars costumes in general, so suit yourself up for the new movie or for any night of fun in that fabled galaxy far, far away.