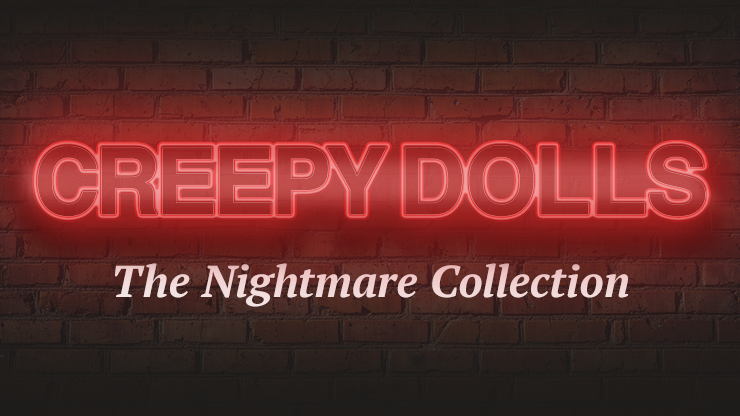 The horror genre has several staples that are bound to give you the heebie-jeebies: jump scares, creepy kids, basements, isolated settings and creepy dolls. We'll be taking an exclusive look at horror movie dolls. What is it about dolls, ventriloquist dummies and mannequins that scare us? The fear of non-human but human-like things is called automatonophobia. Perhaps the unblinking, soulless eyes are unnerving. In a dark room, dolls can be mistaken for a lurking figure. Dolls can even be made to resemble a particular person, which often hits that uncomfortable spot in the uncanny valley. Whatever the case may be, scary dolls aren't about to stop appearing in horror films anytime soon, especially this year with movies like Annabelle Comes Home, the Child's Play reboot and Brahms: The Boy II. If you love niche horror and you're interested in delving into other creepy doll horror movies, we collected some of the most unsettling automatons in the movies for you.

Welcome to the nightmare collection, a dozen of the most iconic creepy dolls and dummies featured in horror movies. Doll boxes are made to advertise the product inside of them...but would you buy any of these? We made sure to mention the dolls' first or main movie, the kill count for the original film, the dolls' evil origins, an interesting movie fact and other franchise movies that feature the doll. (For example, we know that Poltergeist was originally a trilogy before the 2015 remake, but we're not counting movies 2 or 3 because they didn't include the clown doll!) The horror movie kill counts also account for all deaths in the original films, which may or may not be attributed to the doll itself. (Let's face it, not every doll goes on a killing spree due to being the new body for the vengeful spirit of a dying serial killer.) Ventriloquist dummies are also included because they're basically dolls with moving jaws. Check out our collection of creepy doll boxes below!

*Kill counts based on total deaths in the first film, may or may not be attributed to the doll

**"Other Movies" is referring to other movies the doll appears in

We hope you enjoyed our collection of creepy ventriloquist dummies and dolls. How many of these movies were familiar to you? Did you find a few flicks to add to your horror movie watch list? Are there any other horror movies topics that you would like us to touch base with next? We love hearing your comments and suggestions! Hopefully, you found several new horror movies to add to your list for your next horror movie marathon. Check out our scary costumes for Halloween if you're feeling inspired to dress like any of these characters too!

Amanda is a graphic designer at Fun.com, where she does a little bit of everything from costume artwork, emails, social media, and blog content. Her multitasking and Photoshop wizardry come together to bring ideas to life, make great costumes, and save Halloween!

Beyond the office walls, Amanda spends most of her free time going on outdoor adventures and volunteering at a local bike shop.