Incredibles: Through the Ages [Printables] 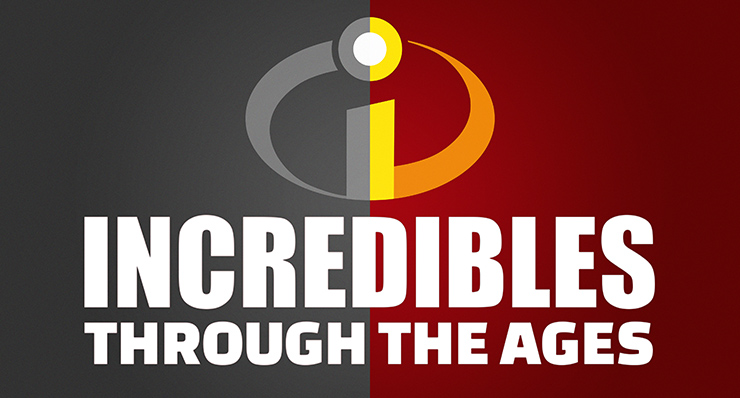 We've been waiting for The Incredibles 2 for what seems like forever, though we can't complain because Pixar has been known to take quite some time to create sequels (and rightfully so). Toy Story had a wait of four years, Cars had a wait of five years, Monsters Inc. had a wait of 12 years, and Finding Nemo had a wait of 13 years. Now, after a wait of 14 years, The Incredibles 2 release date is almost here and we couldn't be more excited to see the Parr family hit the silver screen again. If you're looking to get more hyped up, here's a clip from the upcoming film! To celebrate the release of The Incredibles 2, we thought it'd be fun to take characters from the upcoming film and re-imagine them in the different ages of comics. If you're unfamiliar with these "ages", don't worry, we'll help you out as we go on. So if you're ready to go on an adventure through the past, keep scrolling! 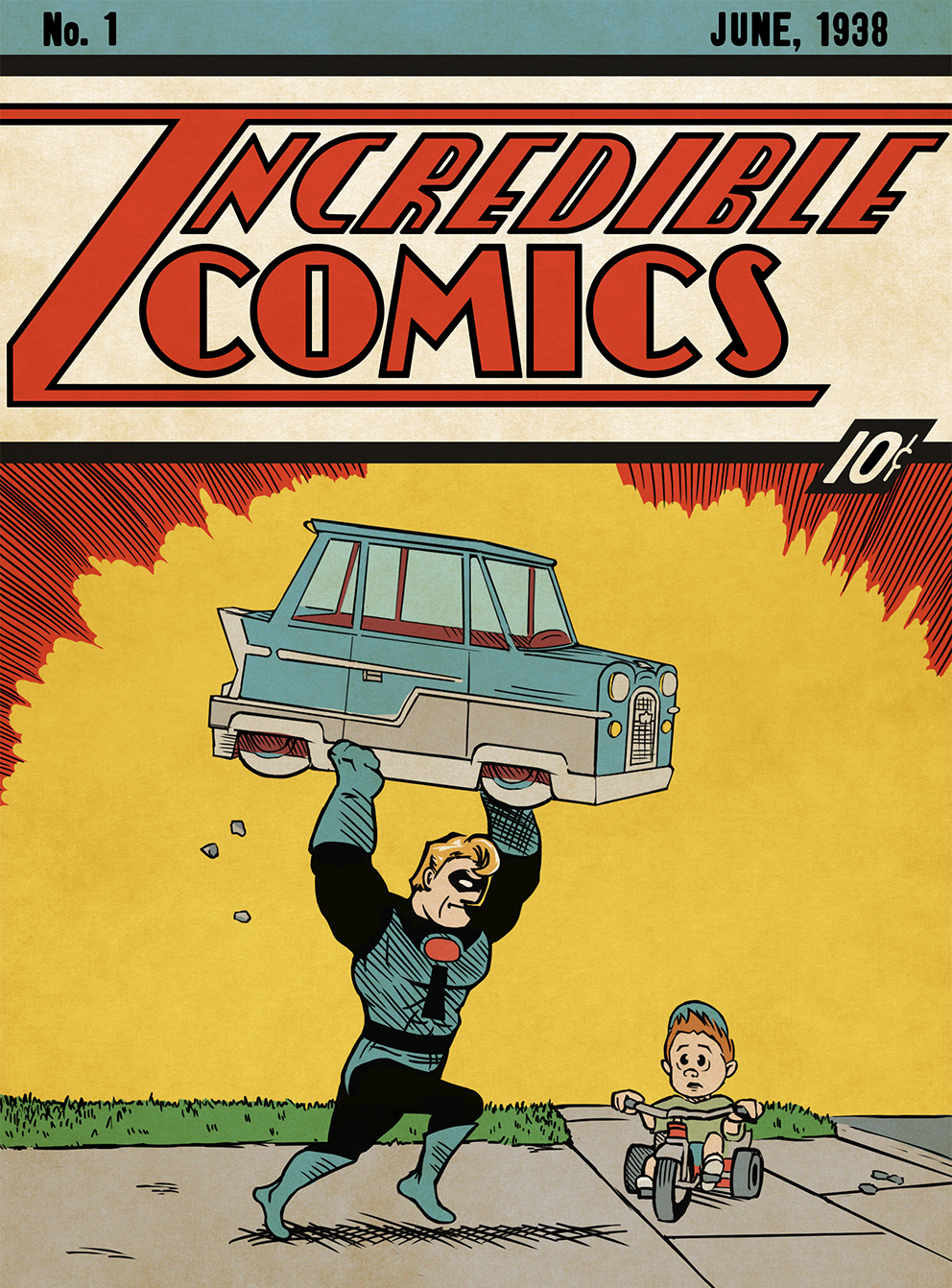 Incredible Comics #1 - Inspired by Action Comics #1: This original comic features the first appearance of Superman and is considered as the beginning of the superhero genre, as well as the most valuable comic in the world. The issue had a print run of 200,000 copies, which was extremely successful and quickly sold out. In latter months, the comic was selling 1,000,000 copies per month. 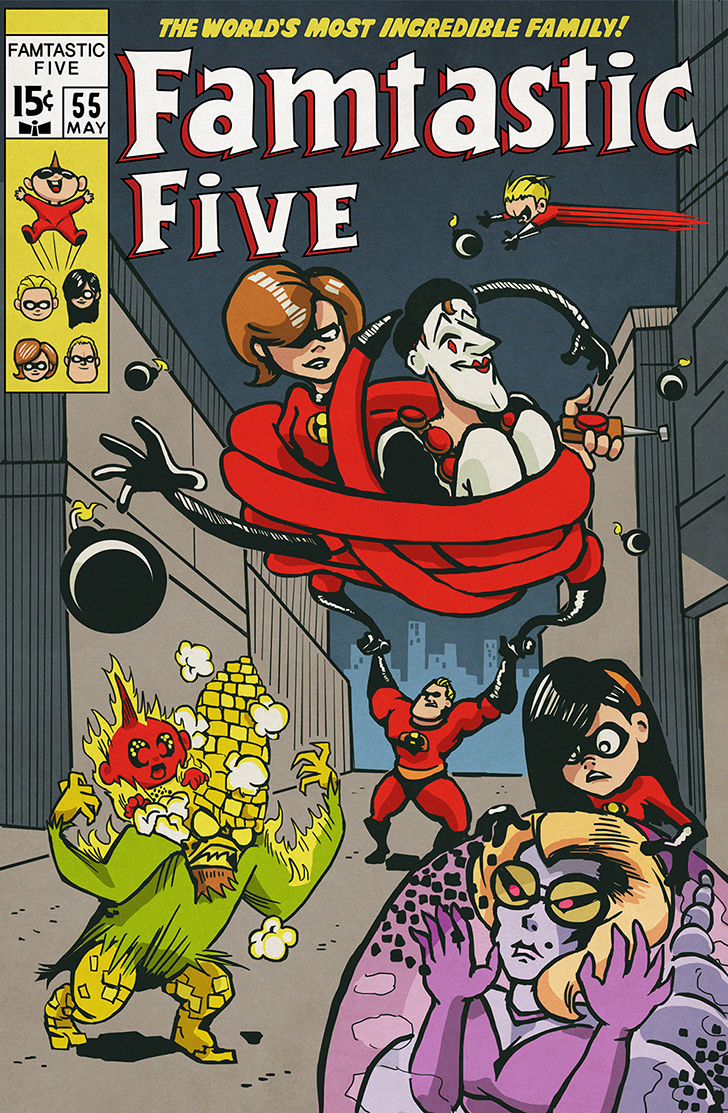 Famtastic Five - Inspired by Fantastic Four Vol 1 #108: The original issue was released March 1971 and featured Nega-Man. This villain was a former friend of Reed Richards who tried to get power from the Negative Zone, despite Reed's warning and in turn, gained energy-based powers and an evil alter ego. 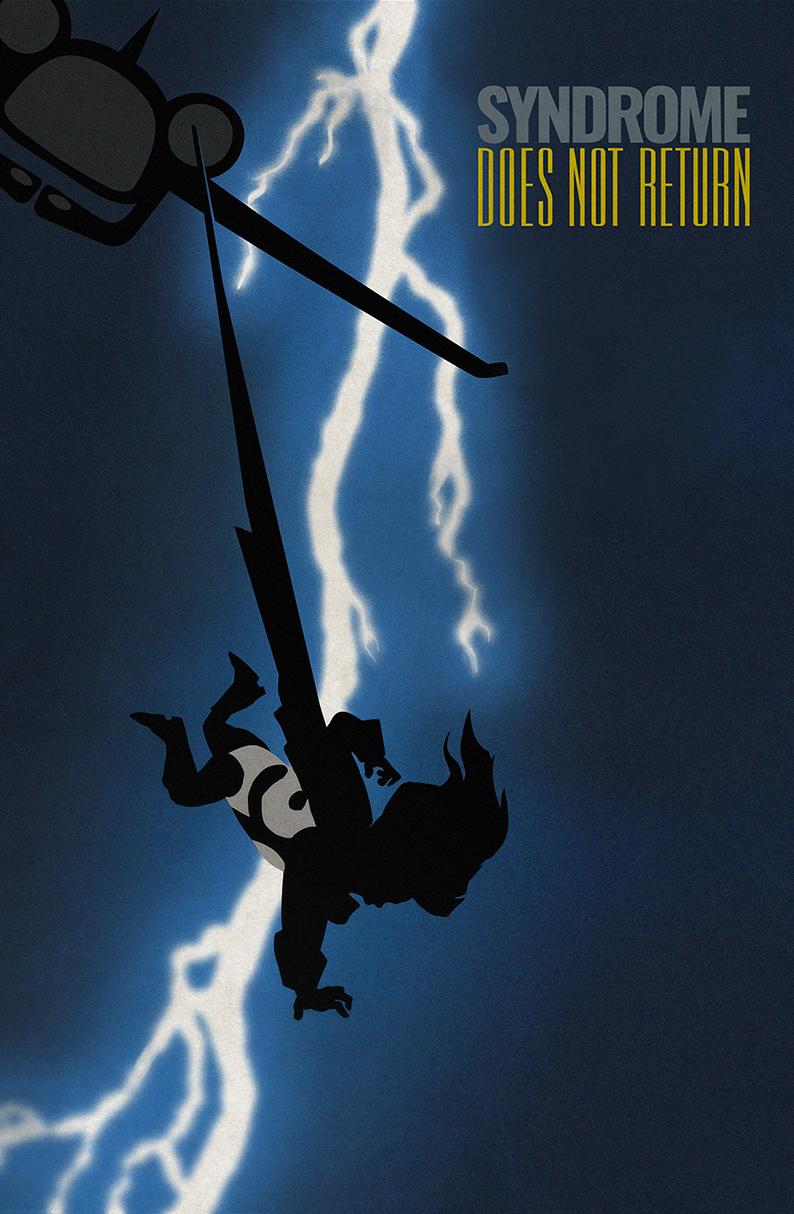 Syndrome Does Not Return - Inspired by The Dark Knight Returns: This four-issue comic book was released in 1986 and followed a 55-year-old Bruce Wayne, coming out of retirement due to his boredom. Within these issues, Batman must fight against Harvey Dent, a mutant gang, the Joker, and Superman. Time Magazine chose the collected edition as one of the 10 best English language graphic novels ever written. 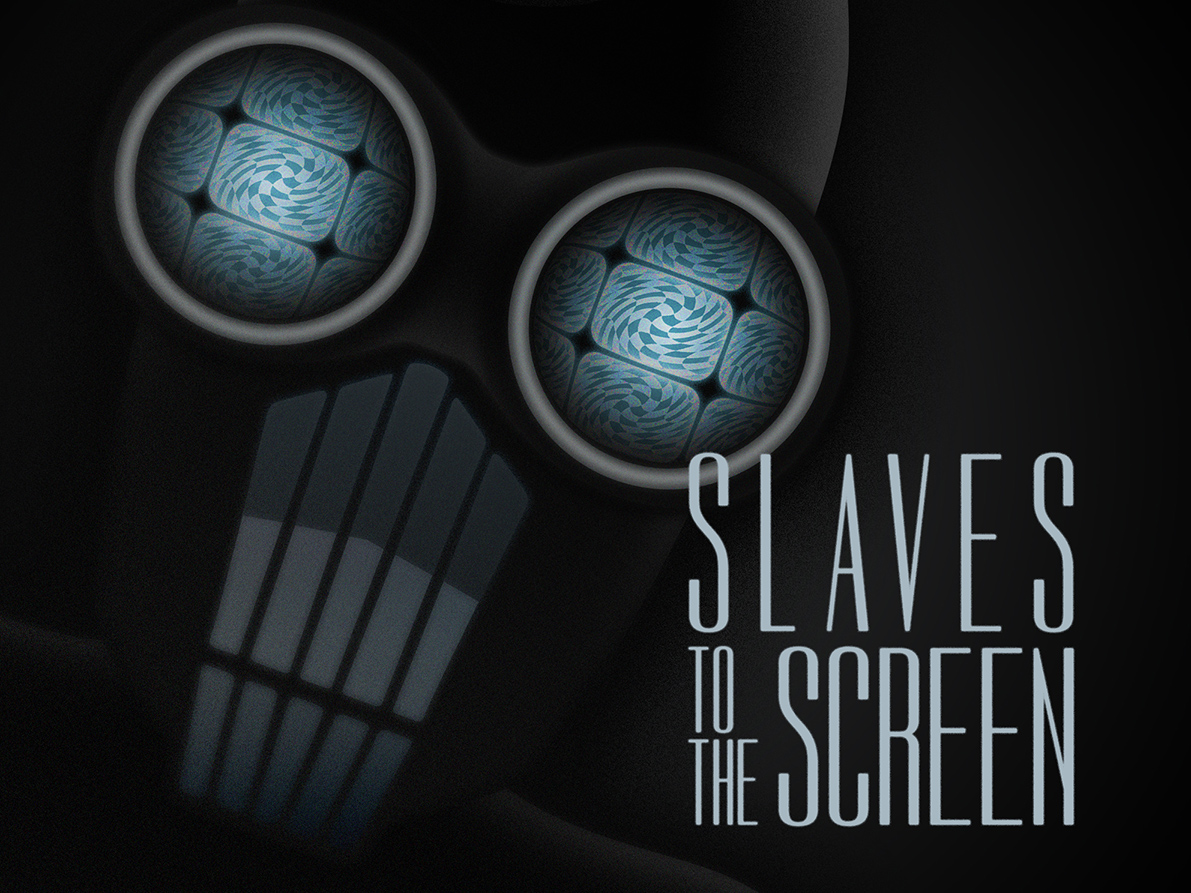 Slaves to the Screen - Inspired by Batman The Animated Series, 'The Last Laugh': The animated television series was praised for it's darker tone and film noir aesthetics. The series first season consisted of 65 episodes, which required animation help from nine different animation houses. The second season consisted of 20 episodes and was mostly animated by Dong Yang, aside from the help from Studio Junio and Jade Animation. 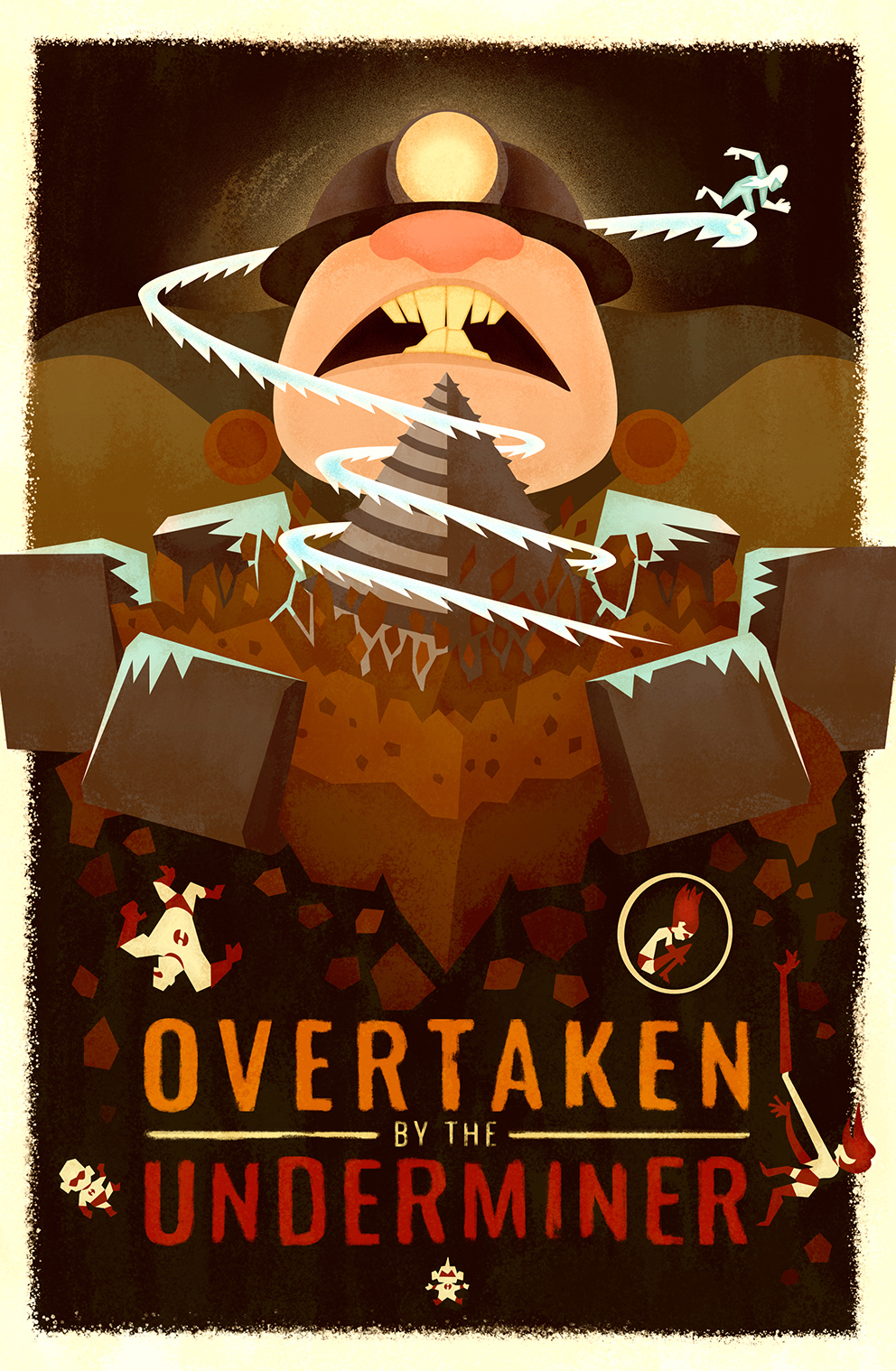 Overtaken by the Underminer - Inspired by Olly Moss: Moss graduated from University of Birmingham in 2008 and is currently a graphic artist. He's best known for his reimagining of movie posters. Though he initially had interest in pursuing advertising, the response to his graphic design and illustration work guided his career change.

How were those for a blast of nostalgia? If you and your family are super fans and are planning on dressing up for the premiere, but don't have the costumes yet, no need to fear, HalloweenCostumes.com is here. Click here to check out our selection of The Incredibles costumes. And just remember....NO CAPES! (Although you might find capes on some of our other Disney costumes!)