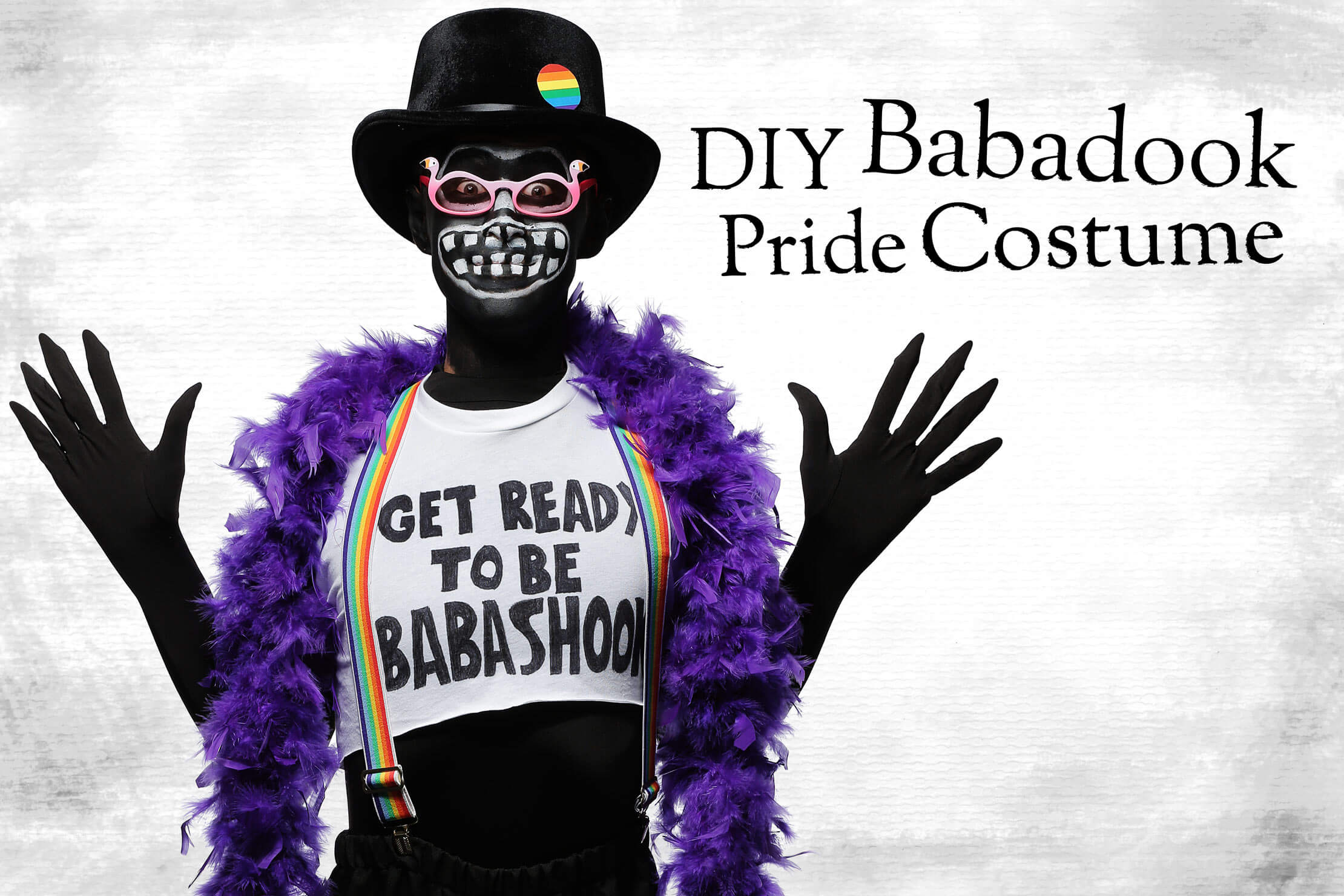 If someone told you a few weeks ago that the Babadook would become the most popular symbol of 2017's Pride Month, you wouldn't have believed them. But, if the past year and a half have taught you a single lesson, literally ANYTHING can happen. Thank goodness for us, this time that "anything" was something incredible. The Babadook is a horror movie released in 2014 about a single mother and her kid being tormented by a storybook character. Pride is a celebration of LGBT rights, love, and acceptance. So, why is the Babadook a gay icon? Well, many reports say that Netflix accidentally added the film to their LGBT section, and as the internet is known to do, the joke took off. Whether that origin story is true or not, we don’t really care, because we love the Babadook’s new inclusion at Pride events around the country. Since we are HalloweenCostumes.com, and this is too amazing to not take part in, we created our own DIY Babadook costume perfect for you to wear to Pride or for Halloween this year. 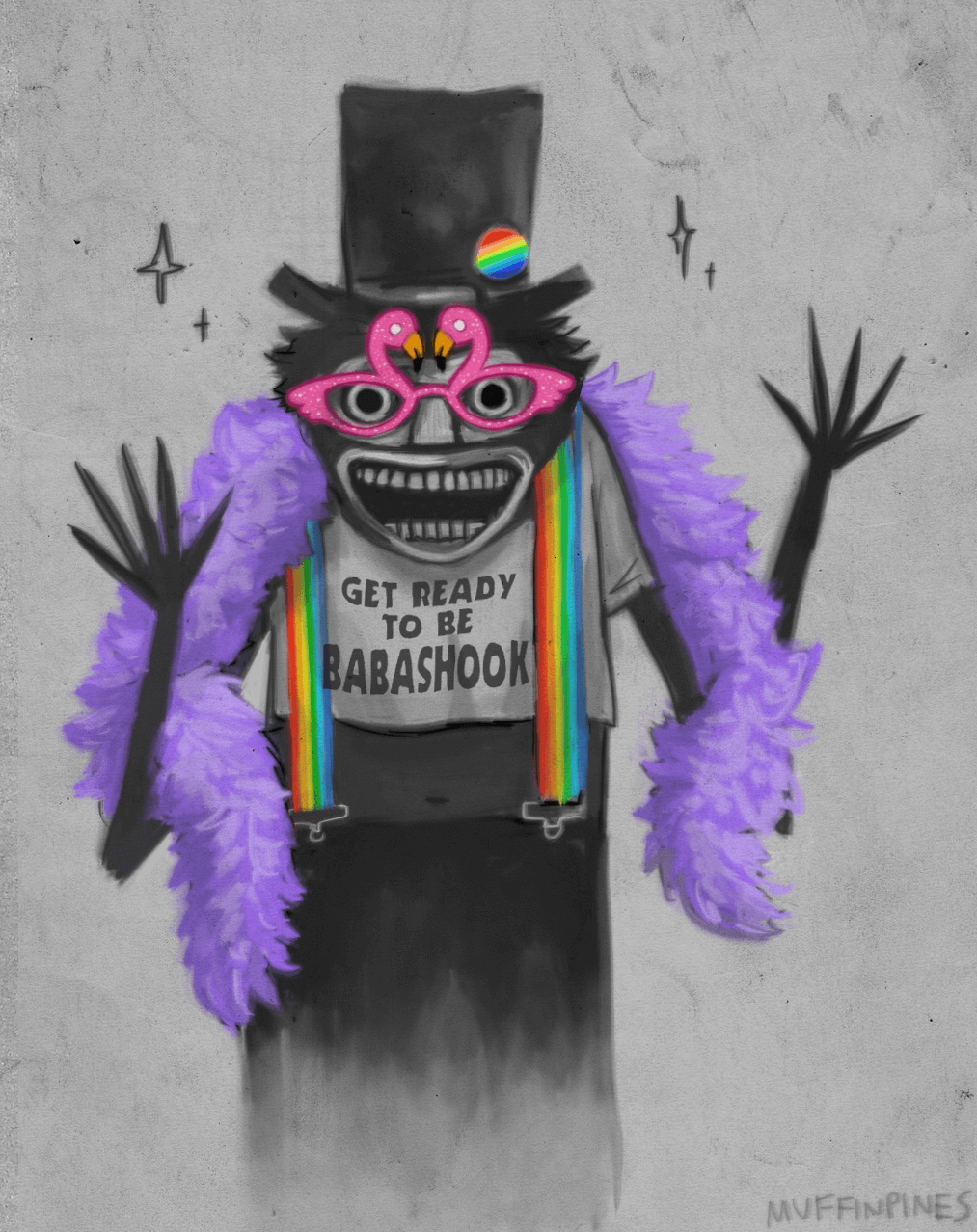 Tumblr artist @muffinpines did the world the most incredible solid when she drew this portrait of Babashook going to his first Pride. After looking at many, many, many images of costumes and fan art online, we knew that Kylie's drawing was the one we wanted to model our DIY costume after. Plus, Babashook is the best Babadook shirt pun, so we couldn't pass that up. 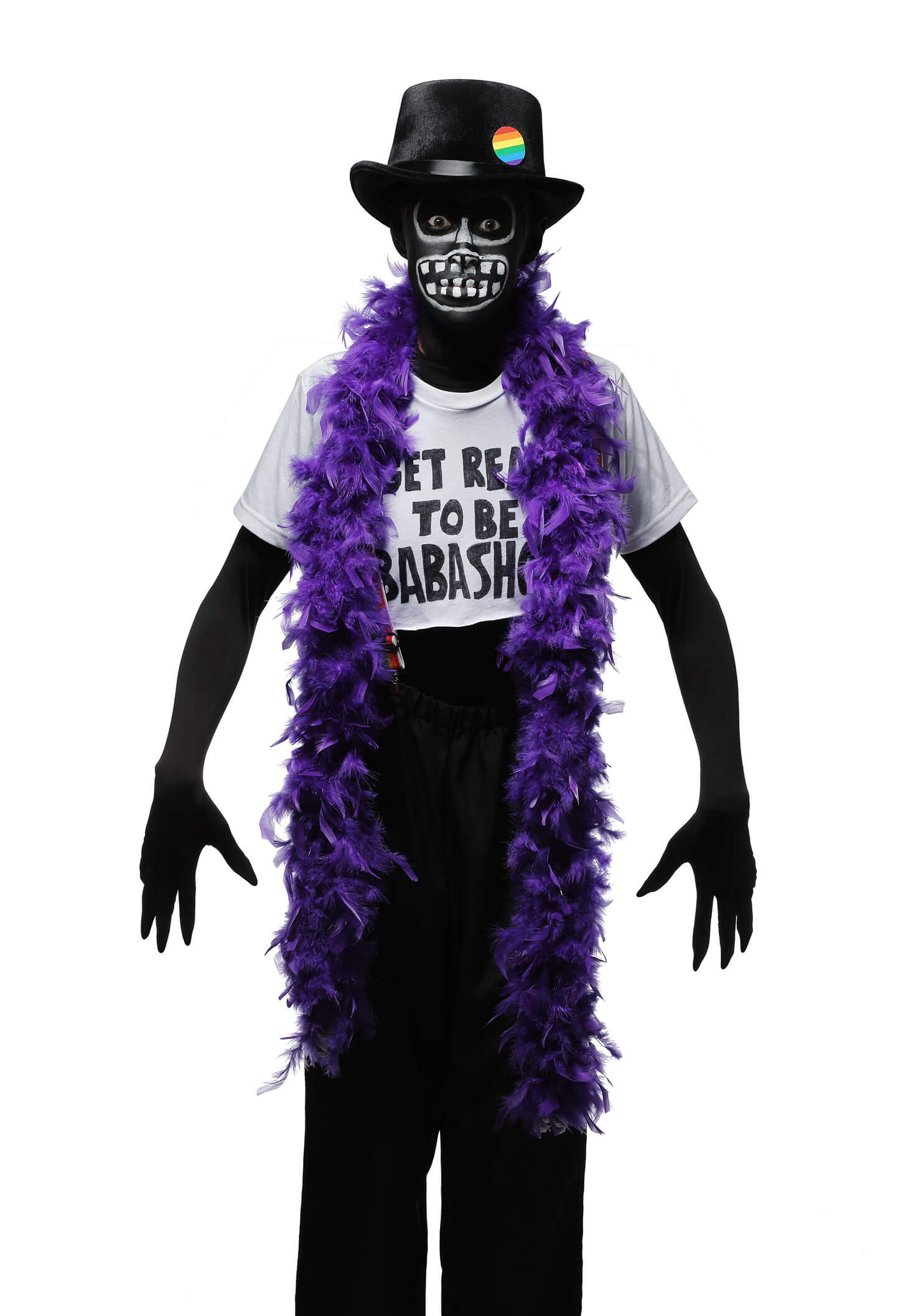 Perfect, right?! To quote one of our favorite signs we've seen, "Shantay, you Babastay." Makeup aside, this DIY costume was very easy to put together. While in the movie, the Babadook was ghastly, ghaunt, sinister, and even a liiiittle murderous, pride-Babadook is the opposite: bright, excited, and full of smiles. 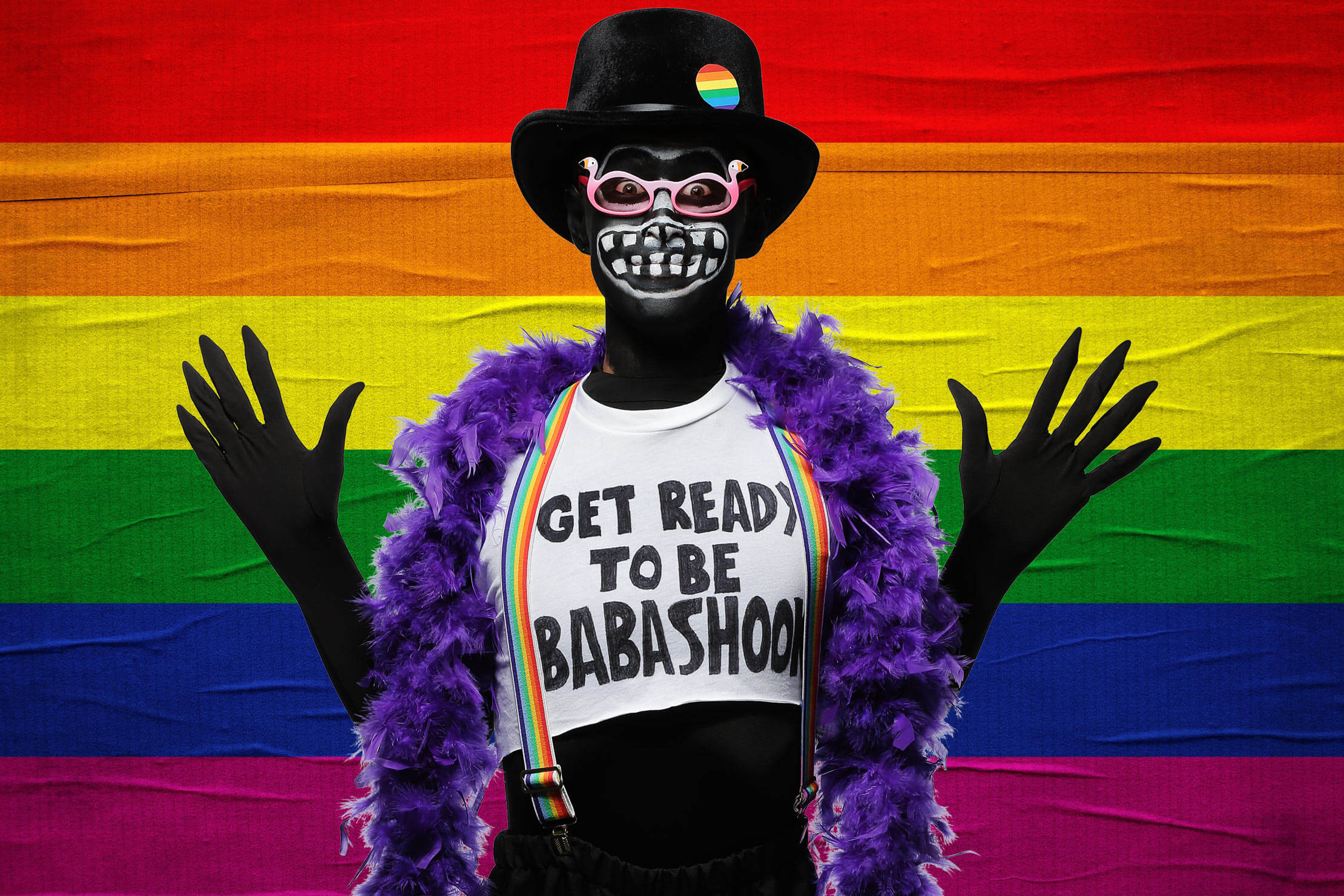 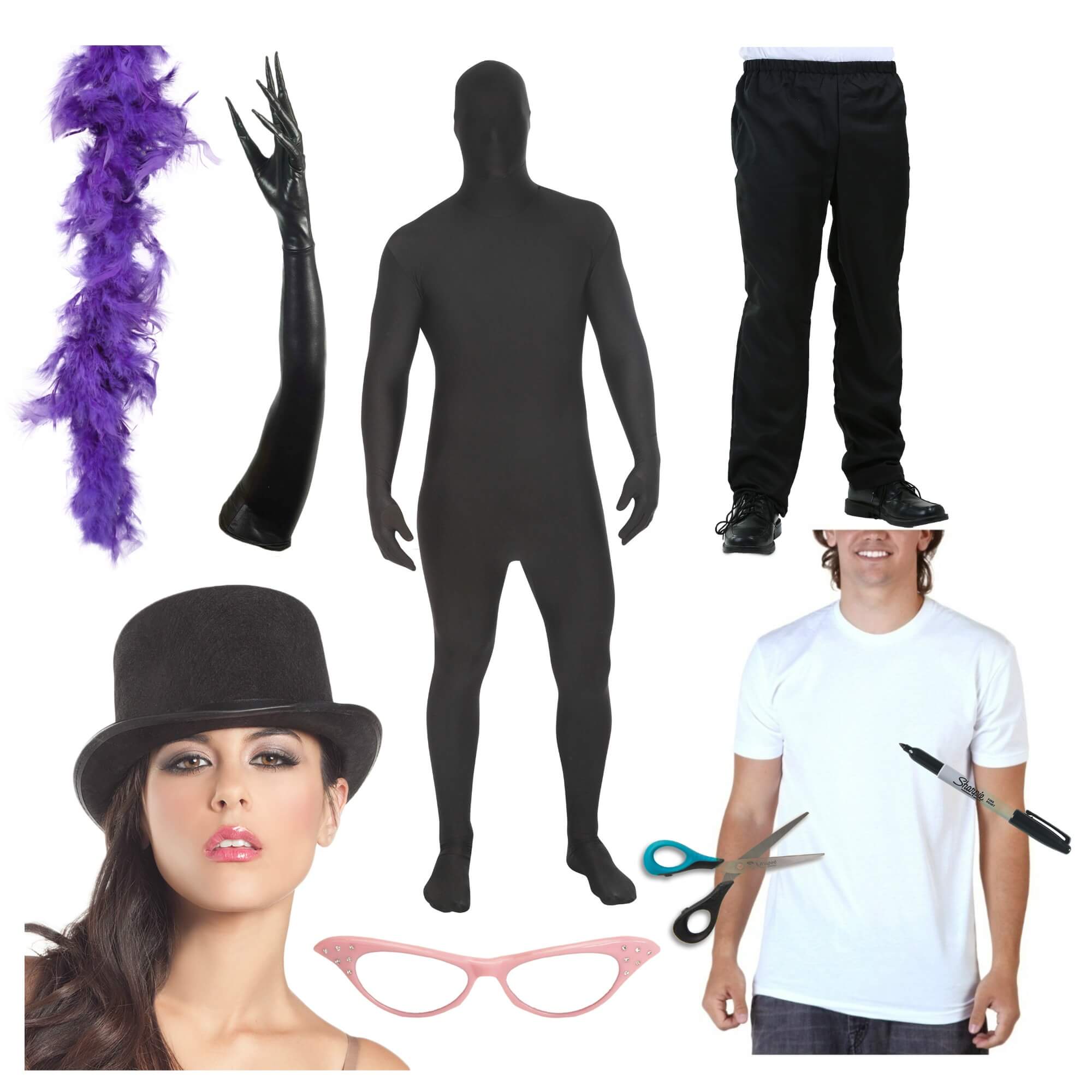 Alright, here's what we did! Take that shirt and use a black marker to write "Get Ready To Be Babashook" on the top and then crop it! Just cut the bottom half off to show off those Baba-abs. For this DIY, we included the full body black suit to give you a creepy, unearthly skin-tone to match the black and white illustrated style of the movie monster. Great news: the solid black skin really makes the rainbow suspenders look even brighter.

We're going to start by outlining our Babadook's mouth. I'm using a Mehron pro pencil in black. You can use any sort of black eyeliner. You could use a lip pencil, just something to outline. You don't have to be perfect.

Ok, so we want to have sort of an exterior sketch line for his lip, and then a little line down here for his gums. And now, we're just going to draw in a bunch of Babdook teeth. They don't have to be pretty again, like a rough drawing. And just like the movie, they're just big, blocky black teeth. So now, I'm just using a small, flat brush, anything cheap from the art supply store with some water-activated white face paint. And, we're just going to go in and fill in our teeth. And, this is like an illustrated look, so nothing has to be perfect.

Now we're going to go back in with that same small, flat brush, and the black water-activated paint, and we're going to go around his eyes. We're just going to pull this nose down further because I want it to be a little longer.

Now we're going with a slightly larger flat brush, and we're just going to go everywhere. You're welcome. I decided that I wanted to increase the white space on his forehead a little, so I'm just going in with some more white.

And he's going to get into his water line with just a jumbo black pencil here. Ok, so now we are going back and redefining the teeth, so we're cleaning things up a little bit just to make them a little bit brighter, and so that they stand out from the rest of the face. Also adding a little definition along the gum.

Ok, close your eyes. We're just going to use black-colored hairspray to dirty up the face and make it look a little bit more animated. So, don't breathe in. Now I'm just using a fluffy brush to go in and sort of blend together the edges with the white.

Ok, so now I'm going in with a slightly larger flat brush, with the same water-activated paint but this time it's really wet. I'm just going to flick some onto it. Ok, so we've got our face painted, so now we're going to take our Babadook to Baba-Shook. So, we're going to add a hat and some fabulous sunglasses, and a boa so that Babadook is ready to go! And that completes your Babadook look.

Market research for this DIY included multiple Google image searches to find the best Babadook outfits from Pride parades and events over the past few weeks. We know, we know. It really is hard work, but someone has to do it. Here are a few of our favs. 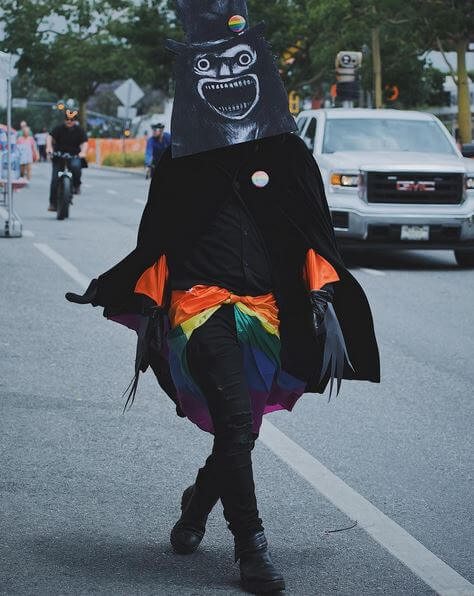 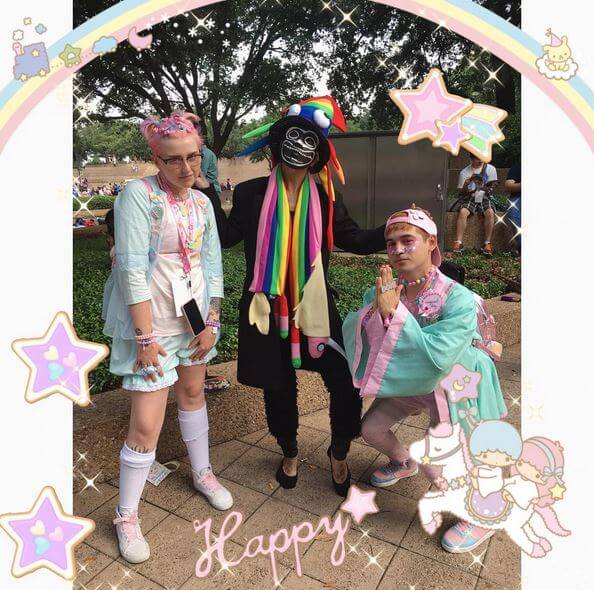 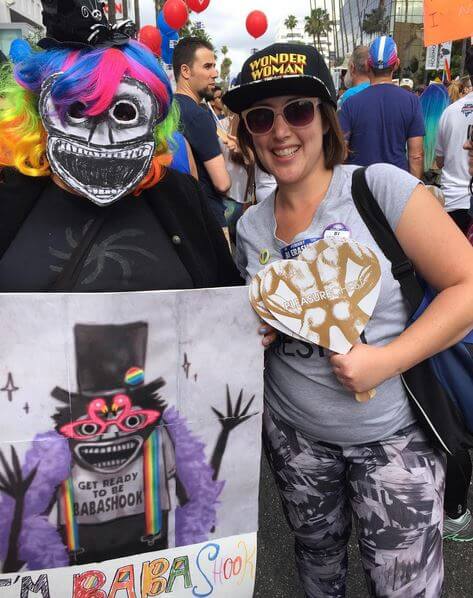 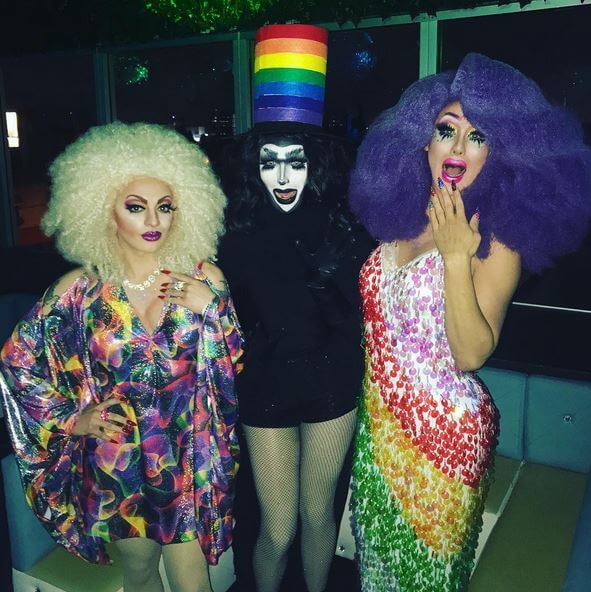 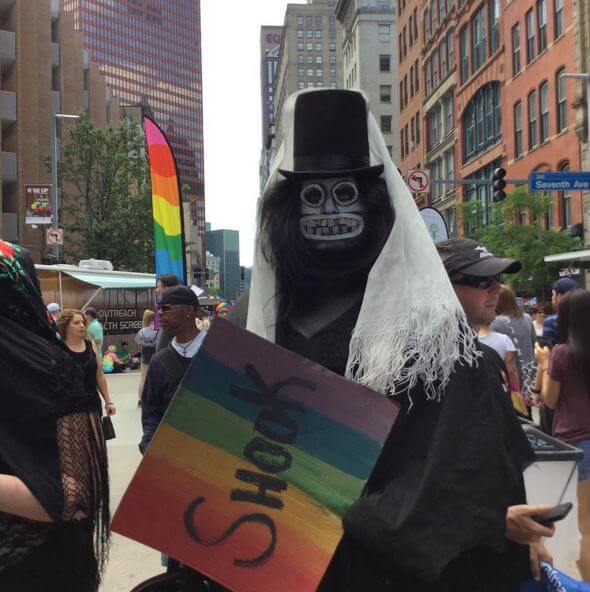 Can you please show us your favorite Babadook costume? Let us know what you think in the comments! If you don't want to jump on this phenomenon quite yet, we have another Pride DIY Costume showing you how to make your own IRL Facebook filter!