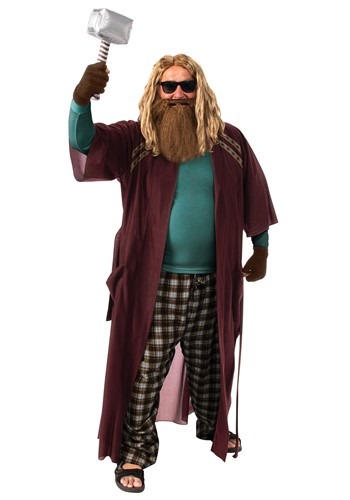 Thor's been through some rough times. Yes, ever since he appeared on the silverscreen back in 2011, he hasn't had the best of luck. Let's just look at all of his hardships that he's faced in the Marvel Cinematic Universe. He lost his mother to the Dark Elves. He lost his brother... twice. First to the Dark Elves, then to Thanos. His old man, Odin, died of old age. His own sister usurped the throne of Asgard and tried to kill him, forcing him to sick Surtur on her just to defeat her. His best friend, the Hulk, even tried to beat him to a pulp. And to top it all off? He failed to save the world from the Infinity Gauntlet, despite taking down Thanos in style.

If anyone deserves a little "me" time on the couch in a bathrobe, it's Thor Odinson! Well, and you, of course! Now with this Avengers End Game Thor Robe Costume, you'll be able to rest AND rule.

This Thor robe costume recreates his look from Avengers: Endgame. It's officially licensed and comes with a maroon bathrobe that's made out of a brushed knit flannel material. It comes with printed graphics on the exterior and also comes with front patch pockets in the front. The robe also features belt loops for the included waist sash belt. The sash is made out of the same fabric as the robe for a look that's ready for a day of video gaming or for saving the world.

Just remember that, even in a robe, Thor is Thor. He wouldn't let anyone push him around, even when he's in his bathrobe. You hear us Noobmaster 69? Don't you try anything, because you will feel the wrath of Thor Odinson if you start calling anyone names!