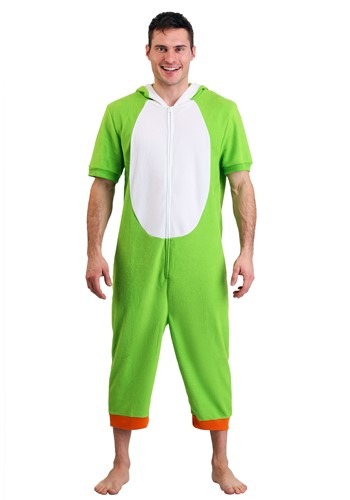 What’s your favorite kind of dinosaur? Some people like T-Rex because he’s big, mean, and has those giant pointy teeth. Others like the Stegosaurus for that big beefy tail. Us? We like Yoshis. Sure, they may only exist in the Super Mario Bros games, but we don’t think that disqualifies them from being our favorite dinosaur. There are red ones, blue ones, yellow ones, and green ones. And then, there’s the celebrity of the Yoshi world… whose name also happens to be Yoshi!

Yes, the Yoshi are a cute species of dinosaurs that help Mario out during all of his adventures. They’ve even been known to be excellent tennis players and they’re pretty good go-kart racers. We doubt that there was ever a T-Rex who could drive a Mariokart!

If you’re going to dress up like a dinosaur, you might as well dress up like the best dino of them all! This Yoshi cosplay romper is a comfy way for you to turn into your favorite dinosaur pal from the Nintendo video games. The jumpsuit is made out of a soft fleece material that comes in the bright green color of Yoshi! It has a white belly and a zipper in the front. The back has an embroidered “turtle shell” in the back and it even has a small, plush tail attached to the back. Finally, the hood has spikes attached to the head and it even has Yoshi face details on top.

Once you have this romper on, you can join Mario on all of his adventures in the Mushroom Kingdom… or you can use it to roleplay as your favorite Super Mario Bros character! We recommend wearing it to a go-kart track to make your dreams of a real-life Mariokart experience come true.