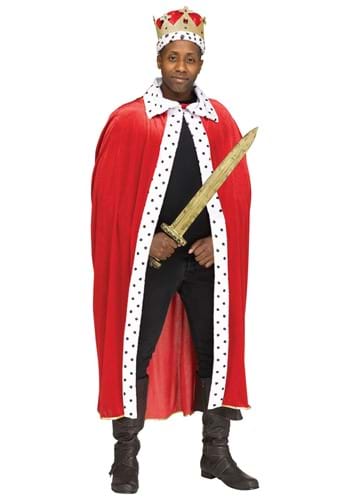 This ancient artifact was originally found by a young man by the name of Alex the Lame. He was wandering around his home country of Macedonia one day when he discovered an ancient cavern, untouched by the hands of many since the beginning of time. Inside this cavern he fought many dangers and solved many riddles, eventually coming upon this wondrous Adult Red King Cape and Crown Set.

Slipping them onto his shoulders and head, he returned to his people. He was immediately made the king of his lands, and led his people on great journeys to fight empires in foreign lands. He became known as one of the greatest conquerors and warriors ever to have lived. Over the course of his life, people began to think of him not as Alex the Lame, as he had been called, but, rather, as Alexander the Great.

One King to Rule Them All

This cape and crown may not give you all the power of tactics and command that it gave Alex back in the day, but it will definitely give you the sense of royalty and a feeling of immense pride in your looks. The cape clasps comfortably at the throat and the crown rests lightly on the head. Maybe you won’t conquer the largest empire of all time in this set, but you will feel like a king!