Chucky Plus Size Costume for Adults 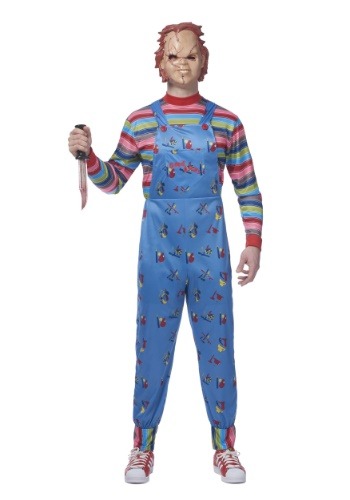 The other day in the office, we had a long discussion about Charles Lee Ray (AKA Chucky AKA the Lakeshore Strangler AKA the killer doll that still haunts our nightmares), and Ryan, one of esteemed employees, brought up a very plausible point. "Chucky is creepy as heck," he concluded, “if my parents ever tried giving that doll to me I would have thrown him in the garbage and demanded Legos or dinosaur toys instead."

Touché, Ryan, touché. He brings up a very good point; why not just chuck the hunk of plastic in the garbage and be done with it? Well, nothing is ever that easy with Chucky the deadly Good Guy doll. Of course, Andy tried that in the movie but the little red-haired maniac always finagled his way out.

Honestly, there's no escaping the wrath of Chucky. In fact, if you are ever unlucky enough to cross paths with him, our best advice is to just surrender your soul because fighting it will only make it harder on you. We also suggest the same thing with this costume. Don't try and resist this costume, just succumb to it and dress up as the knife-wielding doll for Halloween. The costume features a jumpsuit printed to look like overalls and a striped long-sleeved shirt as well as a plastic (and hideous) mask. Pick up a knife prop to add a psychotic touch. Don't even try to throw this costume in the trash because, like Chucky, this costume refuses to be disposed of!