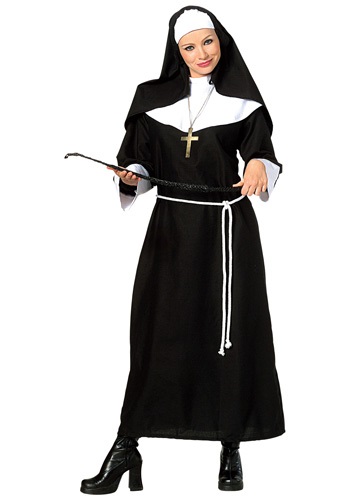 Holy moses! We gotta tell ya, we’re a little nervous about where to go with this costume. Mostly because there are so many places we could go, and some of them are maybe a little delicate, and we don’t really know your life or your experiences, so instead let’s just talk about one of the greatest shows of the 1980’s: The Facts of Life!

This one time, on The Facts of Life, there was a 2-parter episode called “Best Sister” in which Blair’s sister, Meg, comes to visit Blair at school to tell Blair that she’s decided to join the sisterhood. Blair’s got lot of feelings about that, and none of ‘em are good. She basically tells Meg that she’s throwing her life away - she’s rich, beautiful, has a great fiancé (ex-fiancé now, Meg tells her! Get it? Because she’s gonna get married to God instead!)…Blair just doesn’t get it! Then tough, tom-boy Jo - who’s already a Catholic - starts to feel inspired by Meg, so she goes for a walk and realizes how beautiful the world is and how she doesn’t just want her faith to just be a part of her life, she wants it to be all of it, and announces to everyone that she, too, wants to be a nun! Which Blair is NOT down with. In Part 2, she and Jo get into a big fight about it…Blair tells everyone that when her parents were getting a divorce, she prayed and prayed for God to keep them together, which didn’t work, so now she knows that God doesn’t really exist! Jo is so not cool with this declaration and tells Blair so, so Blair gets in Jo’s face and demands that Jo gives her a sign that God’s real, and it gets so heated that Jo ends up PUNCHING Blair in the FACE! Which is not behavior becoming of a nun, amirit?! Anyway, in the end Blair and Jo make up, Blair and Meg make up, Meg goes off to the convent and Jo ends up rethinking her decision to go to one. The End!

We think that what Jo maybe should have done instead was just get this Adult Classic Nun Costume...that way, she could have tried the Nun Lyfe on for size, and it would've saved everyone a lot of time and energy (we would also say that it would have also saved Blair from getting punched in the face, but let's face it: That was bound to happen sometime)!