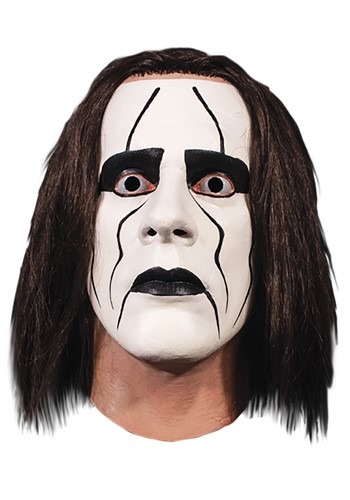 Suiting up as sting

Suiting up as Sting? Well, that's means you're going to need to get two things right. First, you're going to want to master the Scorpion Deathlock. Sting's lethal finishing hold won him plenty of championship belts, so it's going to be important for you to know how to deploy it! Second, you know there's one part of the costume that you absolutely, positively can't flub. You've got to get his facepaint just right! Well, you won't have to worry about doing your own facepaint when you get this WWE Sting Mask. This super-detailed mask covers the entire head and includes hair and Sting's signature facepaint design on the face.

This detailed latex mask comes from Trick or Treat Studios in partnership with the WWE, which means it's officially licensed. The design is based on hundreds of photos of Sting to get his facial features and makeup pattern just right. It covers the entire head with neck covering and hair included. With openings at the eyes and nostrils, and the perfect paint job, it's the best way to complete an authentic Sting costume.

Best part of all

If you're ready to suit up as Sting, be sure to check out our Made by Us Sting Costume. It's also WWE officially licensed, so with the one-two punch of this mask and our exclusive costume, you're sure to be a costume champion!