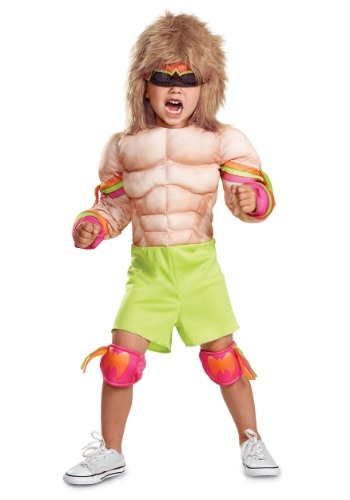 Think you can stop a natural born champ from climbing to the top? Think again. If you get in a champ’s way, he’ll use his signature body slam on you and then he’ll deliver an atomic drop to finish the job. If you try to challenge him, he’ll perform a diving double axe handle on your behind! So, what should you do if you can sense the spirit of a champion growing inside your toddler?

Well, first of all, let him practice his wrestling moves! Not only does it burn off a ton of energy to make him ready for nap time, but it will help prepare him for his very first match. Secondly, you should probably supervise any of his wrestling activity. He’s going to need a top-notch trainer and you need to make sure he doesn’t turn the living room into an absolute train wreck after his practice. Lastly, you’re going to need to get him a show-stopping outfit that’s befitting of a WWE debut!

This WWE Ultimate Warrior muscle costume is a great way to get your kiddo ready for his big WWE debut! It’s based on the legendary wrestler of 80s fame, the Ultimate Warrior. The top has built-in muscles, complete with padding in the chest and arms. It also has pink, green, and orange ribbon accents around the arms and wrists. The shorts are a bright green, which is sure to attract a ton of attention when he steps into the ring. Of course, your little one can’t body slam with the best of them unless he’s wearing the Ultimate Warrior’s signature mask, which this costume conveniently comes with! Once he has it all on, all challengers had better watch out!

This licensed WWE costume will help your child realize his dream of becoming the champ! He may even try to test his moves out on you if you’re not careful.