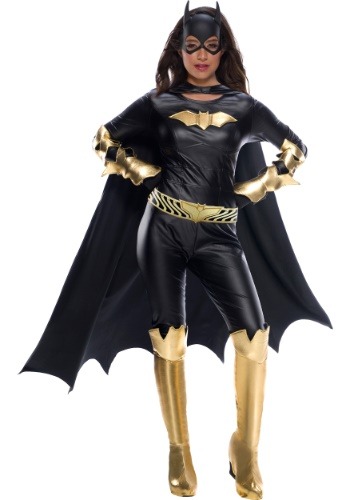 You had your chance, Bruce Wayne. You’ve spent years trying to control the crime problem in Gotham City, but it seems like new supervillains are showing up every week and the old ones are breaking out of Arkham Asylum faster than you can say Batarang. So, maybe it’s time you stepped aside and let someone else take on the role of Batman. After all, you don’t seem to be doing that great of a job keeping crime down, Bruce.

Maybe it’s time for you to show the original Dark Knight how it’s done! Yes, that’s right. You have the determination and you have some pretty sweet ninja moves. You just need a few gadgets and, of course, a superhero style costume. You can take on the mantle of Batman by wearing this officially licensed costume for women.

This premium Batman Arkham Knight costume is inspired by the iconic video game series. It recreates Batman’s look in a style for women, so you can feel fit enough to take on Scarecrow and all of his cronies. It comes with a black jumpsuit that has a zipper in back. It has a brilliant gold Batman symbol on the chest, along with attached boot covers that can be worn with most pairs of women’s boots. It also comes with a foam-backed black and gold belt, and gloves with wide cuffs. Of course, you can't make a heroic pose without a cape, which is why this costume comes with a cape. The finishing touch to the outfit is the face mask, which has an elastic band around the back of the head.

Stock Up On Batarangs

If you’re looking to take on the role of Batman, then you’re going to need this women’s Batman costume. You might also want to stock up on Batarangs, and you also may want to deck out your car like the Batmobile.