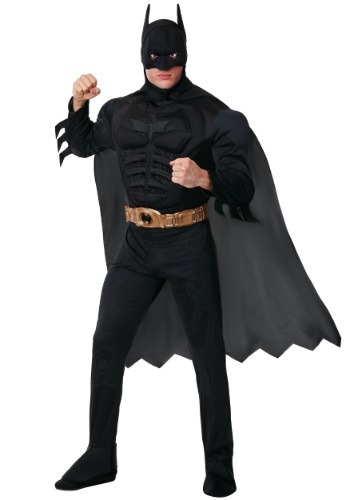 The process of becoming a superhero is pretty rough. First, something traumatic has to happen to you, like having your parents taken from you before your very eyes. Then, you have to be consumed by a desire to avenge them and enact justice for all crime throughout the land. Then, you'll have to seek out someone to train you and after all that, you'll still have to fight villainous wackos who dress up in themed costumes!

Hopefully none of those things have happened to you, and you can simply get yourself Deluxe Dark Knight Costume and call yourself Batman for a night! It also comes with foam boot tops, a gold molded rubber utility belt, and a hood and cape with foam mask, because you're definitely going to want to keep your identity concealed. Because we really don't want those villains from Gotham City tracking you down at work on Monday!

This Dark Knight costume ensemble is styled as black polyester jumpsuit with a molded foam chest and arms for a truly muscular appearance. It features attached boot tops, shoulder padding, and ridged sleeves. A matching black headpiece features a molded facemask and an attached cape. A gold molded rubber utility belt wraps around the waist and secures with ties in the back. And, it's DC Comics officially licensed from the smash hit Dark Knight trilogy

We're all about comic book heroes and Batman's one of the greatest of all time. So you can be sure that we have all the gear for Batman costume fun! Outfit your costume with some of our top accessories, and you'll probably be the best person to suit up as Batman yet!