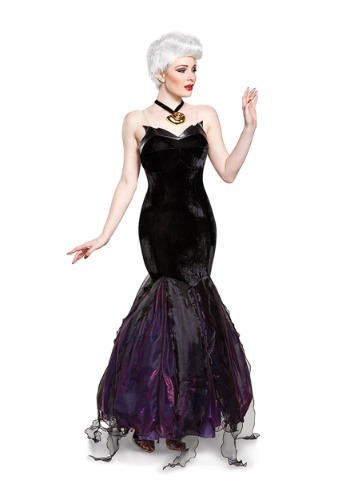 We always picture classic cartoon villains plotting dark hearted schemes in the depths of their chambers. But honestly, we're missing out on the glamor of their lifestyle. It's not as if these classic villains don't have a taste for the finer things. In fact, what we don't realize is these women are quite the socialites, using their power and prestige to live life to the fullest.

Unbeknownst to us mere mortals, the seafaring Ursula holds the Annual Villainess Gala, held off the coast of Denmark. It's secretive, as most exclusive events for the rich and powerful are, in fact, the island itself isn't on anyone's map but the power hungry villains on the guest list. Think of it as a meeting of the U.N. and the Oscars wrapped into one meeting, but the U.N., in this case, is bent on world domination and destruction. There's always new drama unfolding in this group of business associates. Industrial espionage is rampant when it comes to potion formulas or mirror intel. And then there's the personal drama, last year Maleficent showed up with Rumpelstiltskin, the Wicked Witch's ex, that really made waves.

These evil divas show up in the most jaw-dropping threads but no one is ever able to upstage Ursula's ensembles. Maybe it's the magical influence of the sea, maybe Flotsam and Jetsam have a dash of creative genius but she always shows up in understated elegance. Always on point, this year she's wearing a gown that plays on her classic Little Mermaid ensemble. The drop waisted velvet body creates an enchanting silhouette. She took a hint from the merfolk with the mermaid tail hemline in subtle Ursula colors. The whole ensemble nods to her nefarious past while maintaining an elegant appeal. If you passed up a chance to attend an event in this ensemble you'll truly be a poor unfortunate soul.