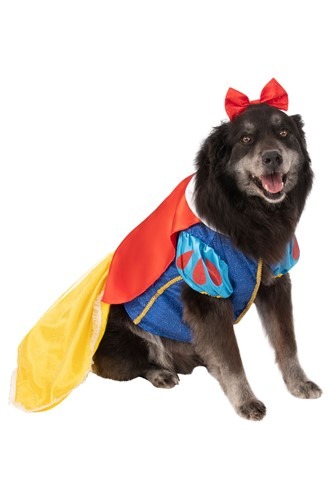 Once upon a time, there was an evil queen. She owned a peculiar mirror that could tell her almost anything that she wished to know. One day, she looked into the mirror and asked, "Mirror, Mirror on the wall... who is the furriest of them all." To which the Mirror would reply, "Why, Doggo White is the furriest of them all." The queen was quite displeased with this information and went to punish Doggo White for being the furriest princess in all of the kingdom, but as soon as the queen laid eyes on the pupper, her heart melted. Instead of punishing the poor princess pup, she decided to play fetch with Doggo White, and Doggo White showered the not-so-evil queen with tail wags and puppy kisses. Everyone lived happily ever after!

What was that? Oh, that was our rendition of Snow White if the titular character was a doggy princess. We're thinking your dog would be the perfect cast for the lead role! She just has to wear this officially licensed Disney costume!

This Plus Size Snow White Pet Costume is an outfit based on the classic character from the animated film. It comes with a dress that recreates the look of Snow White's outfit from the movie. Your dog's front paws fit through the front sleeves, making it easy to get your pooch dressed as a princess. Finally, the bow brings the whole look together! If you want to retell the iconic story with your puppy as the lead character, then this adorable costume is exactly what you need!