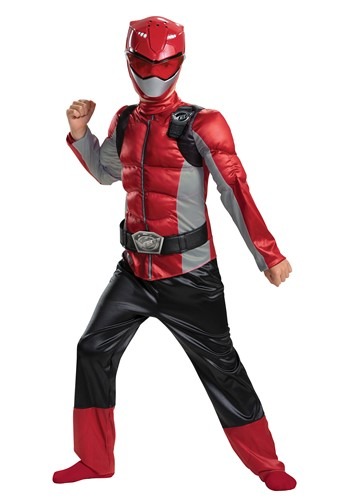 Is your kiddo all about the Beast Morphers Rangers? Alright! That's a great way to be. He or she is sure to love watching the intense action of the latest Power Rangers series, but we're here to let your child know that there's a new way for them to get involved in the fun. By suiting up in our Red Ranger Beast Morphers costume!

With this officially licensed costume, your child can show off their Power Rangers style by going as their favorite character, the Beast Morphers' Red Ranger. Devon Daniels wears the suit and has amazing powers like hyper speed and his Beast Racer Zord. You might still be catching up on the show to learn the ins-and-outs, but we're here to let you know your kid is ready for the action. So, suit them up!

Power Rangers and Hasbro officially licensed, this Power Rangers Beast Morphers Kids Red Ranger Classic comes with a super-detailed jumpsuit and mask. The fully printed jumpsuit has fiberfill padding for muscle effect, and extra touches like an attached belt and transporter on the shoulder. It secures with a simple hook and loop fastener in the back. The rigid mask completes the theme, with a red see-through visor and elastic band in the back it covers the front of the face. Suit them up in this costume, and while they might not be ready to pilot a zord, they will definitely be ready for trick-or-treating on Halloween night!

Wired: Suiting up as the Beast Morphers to save the day!

Rest assured, the Rangers are most certainly not tired when it comes to the youngest fans. So, grab this Red Ranger Costume, and shop our entire selection of Power Rangers Costumes to outfit every member of your child's team!