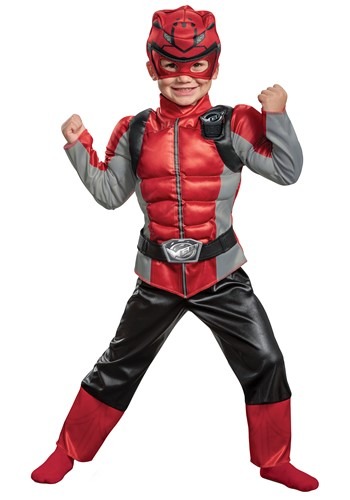 The Leader of the Beast Morphers!

Is your kid ready to suit up as Devon Daniels? Wait, maybe you don't even know who that is! You'd have to be paying close attention to the long-running television series Power Rangers to know that Devon is the newest Red Ranger and leader of the Beast Morphers Power Rangers team. Your kid, of course, knows all of that already, which is why he's asking you to get him this Beast Morphers Red Ranger Costume for Kids. This costume has everything he needs to feel like the Red Ranger running around with his Beast Racer Zord and powerful Cheetah DNA. And we're sure that's going to make for some real Halloween fun!

Officially licensed by Power Rangers and Hasbro, this easy-to-wear costume features fun details and comfy features. It comes with a fully printed jumpsuit in red, silver, and black. Extra fiberfill stuffing is featured in the arms and chest for a fun muscle effect. A faux foam belt and transporter are attached at the chest and shoulder to add extra detail. All he has to do to complete the look is slip on the foam-backed hat. It features printed details and an attached eye mask for full character effect!

So, this costume quite obviously makes a great Halloween costume selection. Since he'll be dressed as a real deal Power Ranger, we're sure he'll feel extra confident when running around collecting all those yummy trick-or-treats! Naturally, the same effect will be just as useful at playtime, when he can set up a backyard battle battling the worst enemies. What we're saying here is, when you get this costume, we're sure your kid will be set for many hours of fun!