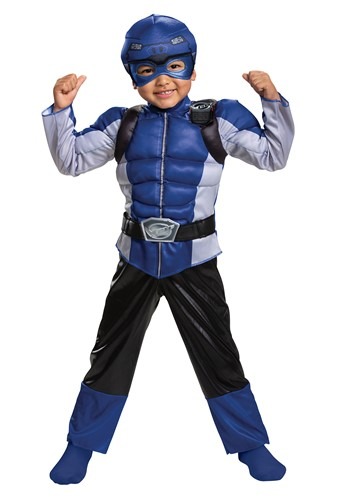 All About the Blue Ranger

Go, Blue Ranger! When it comes to the Power Rangers, there's been quite a few to wear the blue suit over the years. Of course, the newest one is Ravi Shaw, the second-in-command of the Beast Morphers Rangers! He's probably your kid's favorite, too, since they haven't had time to catch up on the other classic Power Rangers teams. And that's great, since this new Blue Ranger is super tough with his Gorilla DNA link and his awesome Wheeler Zord. We think it's safe to say he's a pretty awesome hero to emulate this Halloween! And your kid can do just that when they slip into this Beast Morphers Kid's Blue Ranger Costume.

Officially licensed by Power Rangers and Hasbro, this easy-to-wear costume comes with a fully printed jumpsuit in blue, silver, and black. It features fiberfill stuffing effects in the arms and chest to give them the appearance of extra muscles. A faux foam belt and transporter are attached at the chest and shoulder to add extra detail. All he has to do to complete the look is slip on the foam-backed hat. It features printed details and an attached eye mask that will let him feel like he just did a Blue Beast Morph!

Ready for the Mission

Full of real deal Beast Morphers style, we're sure this Blue Ranger Costume will have him feeling like he'll be ready to save the day should any bad guys show up on the scene. Of course, fingers crossed, all he'll have to focus on for his mission is securing loads and loads of trick-or-treat candy! Get him this costume, and we're sure he'll be making great Halloween memories as the Blue Ranger. It's Morphin Time!