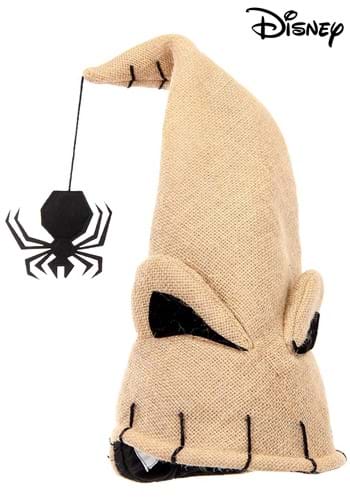 The Oogie Boogie Man has got it going on. He's got the pipes, the spooky swagger, and so much confidence that you could probably power up Halloween Town if you could harness it and use it for electricity. The only problem is, he's literally filled with bugs. Yeah, that's a problematic downfall. Also, he was super mean to Santa Clause. We get that he's a villain but who hoists Santa up on a hook? Oh, and let's not forget that he gambles all the time. Okay, okay, he's kind of a horrible character which makes him a great candidate for a Halloween character.

This Oogie Boogie hat has a burlap sack texture just like the Nightmare Before Christmas character. The hem of the hat has thick piping with long black threads along the teeth. The eyes are dramatic with mischevious eyes and thick lids. The tip has a spider dragging from the end, hinting at the bugs that might lie beneath.

Lucky for you, you don't have to be filled with insects and snakes to become Halloween Town's biggest nightmare. And while we can't guarantee that you'd have a great voice and a groovy, jazzy way of dancing around the room but that's totally up to you! Want to make this a group costume? Pair up with Jack, Sally, or your cohorts Lock, Shock, and Barrel! So get out there, it's about time your little town got a taste of some Oogie Boogie fears.