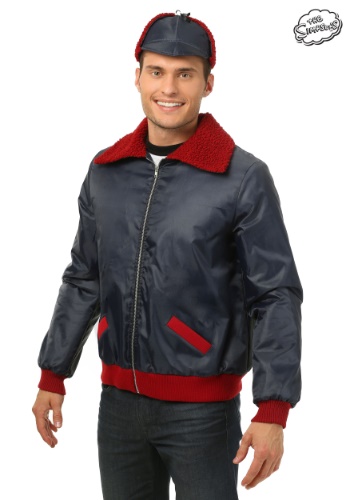 We come from the land of ice and snow also known as Minnesota, so we know the value of having a good snowplow driver at the ready.

Even though we have no idea where it's located, Springfield seems to have the same winter problems as us. When you need to get to Moe’s Tavern but all of Springfield is covered in ten inches of snow? That’s when it’s time to trade in your car and head to the used car lot and pick up a truck with a plow (the only logical choice for the situation, of course). But it's not so easy to follow in the footsteps of Homer Simpson. Like him, you'll need a catchy jingle, a well-made commercial and, last but not least, you’ll need an advertising jacket!

Officially licensed from The Simpsons, this exclusive Mr. Plow jacket looks just like the one worn by Homer in the iconic episode “Mr. Plow.” It has a dark blue exterior with red accents at the pockets, the sleeves, and around the bottom. The collar also has a faux sheep-fleece material that is a matching red color. “Mr. Plow” is printed on the back to let everyone know that you’re here to plow some driveways! Or maybe just sing that amazing jingle. The jacket even comes with a matching hat so you're all set for your big commercial debut.

Just watch out for the Plow King while you're out there! (He knows Linda Ronstadt. We're not sure how to compete with that kind of star power, honestly...)