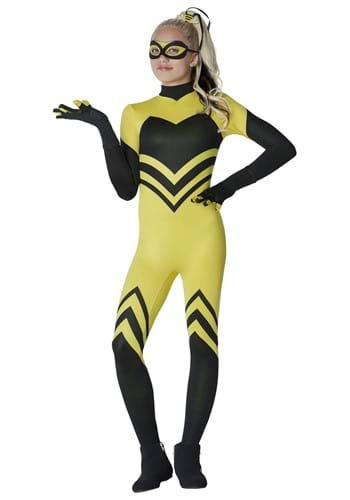 Sometimes it feels like the rest of the swarm wants you to be someone you’re not. They say, “You’re just a honey bee, act like it!” and “Stop trying to be a movie star!” It’s a lot of pressure for anyone to take, especially when you feel like you are so much more than just a honey bee flitting from flower to flower. Chloe Bourgeois doesn’t have to listen to that nonsense!

Now if you look at Chloe Bourgeois, you will see that she was wise to not let her peers cramp her style. She is confident and capable, and doesn’t let anyone bully her into doing things that she knows are wrong. Sure, she sometimes has to cross the Ladybug, but as a fellow Miraculer, she knows when to take a stand. Chloe knows that she has to be true to herself in order to help her friends.

When you wear this Miraculous Ladybug Girl’s Queen Bee Costume, you will know that you look just like Chloe Bourgeois in the same role. The yellow and black striped jumpsuit is modeled after the costume that the Queen Bee herself wears. It has hook & loop fastener at the back, fitting snugly over the arms and legs. The eye mask and bee-shaped hair ornament both give that little bit of extra zip that every Queen Bee needs.

If your child wants to look like the Queen Bee, Chloe Bourgeois, from Miraculous Ladybug, then this is the costume for you. Whether buzzing around the hive or going out for flowers, your child will feel and look just like she wants to!