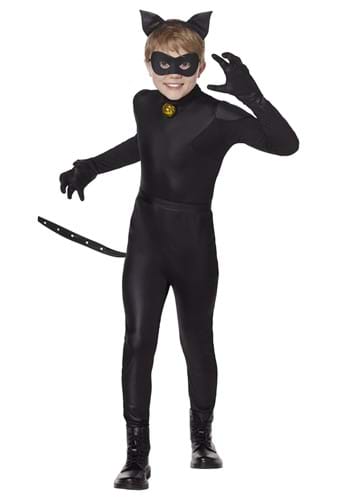 Popular! 3 have looked at this recently.

Adrien Agreste is a normal teenager. He likes basketball, video games, and defeating supervillains that threaten the safety of Paris! Okay, so maybe that last bit isn't something that most teenagers are doing, but there's one little thing about him that just isn't normal. He's in possession of the powerful Cat Miraculous. That means he has an obligation to stop evil schemes as the one and only Cat Noir! Of course, if that lets him cross paths with Ladybug, he definitely won't complain!

If your child is looking to jump into the superhero lifestyle, he's going to need an outfit that's fit for a superhero. This Kid's Cat Noir Costume is an easy choice for your young hero-in-training. It grants your child the outfit without having to track down a Miraculous of your own!

This officially licensed costume transforms your child into their favorite hero. The costume begins with a jumpsuit constructed out of a jersey knit fabric. The back has a fastener in the center to help for quick and easy fitting. The neck has a small bell attached to the front, keeping a realistic touch to the outfit seen in the cartoon series. The belt has a detachable tail and the included gloves stretch to fit. The molded mask has an elastic band for fitting and the cat ear headband brings the whole look together.

Next Level Your Cat Noir Costume

Villains always seem to pop up when you least expect them! That's why Cat Noir often teams up with Ladybug to thwart evil at every step. That's why we recommend teaming up with one of our Miraculous Ladybug costumes to help reunite the team. Also, be sure to check out some of our costume boots to put the finishing touch on your child's Cat Noir costume!