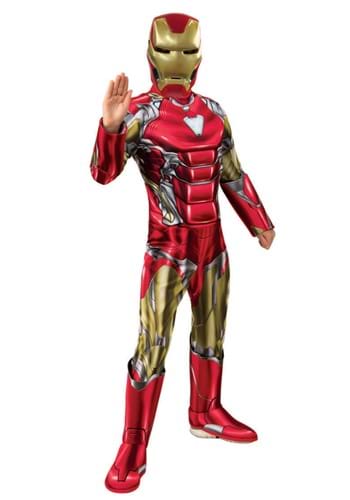 The world has been in danger before, but never like today. In your career as a superhero, you've taken down terrorists and an enemy within your own company. You've lit up a space alien army led by the Trickster God who was cast out of Asgard. You've stopped a small city from becoming pulverized by a DIY meteor made by an AI system gone rogue (ok, that one was a little on you). But when Thanos snaps his fingers and makes half of your friends disappear into dust, you'll do anything it takes to set it right, including taking the gauntlet yourself. After all, he may be inevitable - but you're Iron Man!

Tony Stark is possibly the best Avenger of all time, and when you wear this officially licensed Marvel End Game Deluxe Iron Man Child Costume, you'll feel like the greatest of all time too! The jumpsuit's fabric has a shiny metallic finish and is printed all over with graphics to make it look just like Stark's costume from the Marvel movies, including armor plating on the arms, chest, and legs, and the triangular Arc Reactor in the center of the chest. The boot covers that look like Tony's flight boots (sorry, thrusters not included), and the wrist gauntlets are attached. The Iron Man mask covers your entire face with viewing ports for your eyes.

A Hero for the Ages

You might be a wisecracking billionaire genius playboy, but you also have a heart of gold and a fierce loyalty to your friends. You'll do anything you can to protect them, which makes you the greatest hero of all.