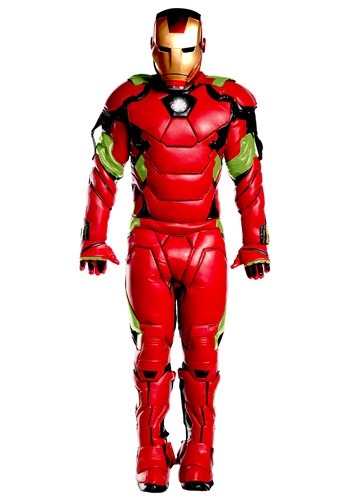 Not Your Typical Suit

Against all odds, battling impossible circumstances, a new hero will rise to save the day! Imprisoned in a terrorist’s bunker, the outlook appears devastatingly bleak for billionaire playboy Tony Stark. Bleak, that is, unless you know his brilliant mind! Armed with raw intelligence and….vague sciencey principles that let him fashion a flying, killing machine out of what looks like old car mufflers….Stark escapes the would-be villains and blasts off to safety! We still wonder how he managed not to get cooked like a goose when the terrorists used firepower against his metal armor, but that is not for small minds to ponder.

Of course, the suit Stark used in his first victory was primitive compared to his later attempts. Halloweencostumes.com brokered a deal with the genius inventor that gives us access to his best, most advanced technology yet! Suit up in your officially licensed Premium Marvel Adult Iron Man Costume and answer the hero’s call! This super jumpsuit features Tony’s iconic red and gold body armor with the gloves and shoe coverings to match. It also wears much more comfortably than iron, might we add. Pull-on the gold-faced helmet as the final layer of protection and awesomeness! Jarvis sold separately (ask Stark – he wouldn’t give up the specs).

There’s no downside to dressing as everyone’s favorite iron superhero! You’ll look so amazing that you’ll want to wear your costume everywhere, not just into combat. And if Stark’s successes are anything to judge by, the ladies will love it too!