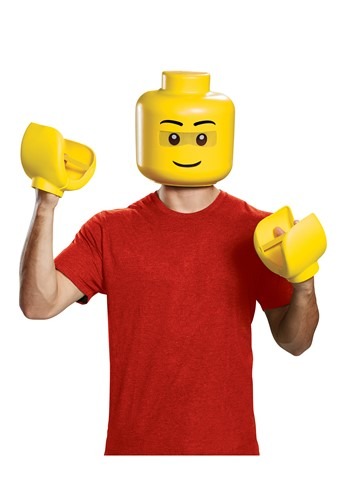 Ah, the LEGO Guy. He taught us an important lesson when we were younger. He was an astronaut, exploring the far reaches of outer space. He was a humble city resident, who drove the rescue helicopter. He was a pirate, who could sail to every corner of the seven seas. He was a brave knight, who could protect the kingdom from any foe. He was a merry member of the Forestmen, who stood up against tyranny in the Medieval ages. He traveled to the bottom of the ocean in his submarine. He was a ninja. He was a wizard. Sometimes, he was just a humble guy living in the massive, mismatched house you'd built him with whatever pieces you had laying around. The point is that the LEGO Guy could be anything you wanted to be and we took that lesson to heart! Growing up, we knew we could be just like the LEGO Guy!

Of course, we didn't really think that in a literal sense, it was more of an inspirational lesson about being anything you want to be... but with this LEGO Mask and Hands Kit, you can literally become just like the classic LEGO Guy!

This LEGO Mask and Hands Kit comes with a molded mask that looks just like a classic minifigure head. It comes in two pieces that come together to form the cylindrical shape. It also comes with a pair of mitts to make your hands look like the classic LEGO hands. Pair them up with any costume to become any sort of LEGO Guy you can imagine!

Questions & Answers
Q: Hey just wondering is the lego mask is big enough for an adult